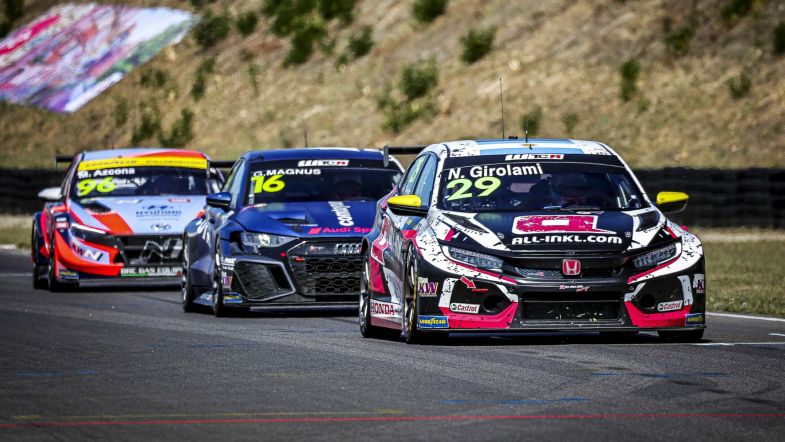 Girolami had started from pole position but was quickly passed by eventual race winner, Comtoyou Racing’s Nathanaël Berthon, before fending off chief title rival Mikel Azcona midway through the race.

After Azcona was overtaken by Berthon’s team-mate Gilles Magnus, however, the pressure intensified for Girolami who had to defend heavily from the Audi RS 3 LMS on more than one occasion.

“For me it was all about doing a good job at the start,” explained Girolami during the post-race press conference.

“I expected that Nat would come so from the outside I tried to break his speed but while leaving a margin. He overtook me very well and from there on I had to try to defend myself from Azcona.

“Then I saw Azcona had lost the position to Gilles so I said ‘okay, I have to pray that Nat is not pulling away because I needed his tow to stay in second position. Without that it would have been very difficult to defend. Gilles tried everything.

“I was being a bit careful because I was told he was really pushing a lot – even with my team-mate. I had some hard moments with him, but always with respect and fair play. That’s very important.”

As Magnus made his way ahead of Azcona, it was clear to Girolami that the Audi had better pace than the Honda. Berthon admitted that he had been trying to back Girolami into Magnus in order to make it an Audi one-two.

“We are working as a team. For me it’s more important to see an Audi in front so I knew I had to help Gilles to get on the podium. I did my best,” Berthon said.

“Sorry for Bebu because I know it’s annoying for him. But it’s also part of the game. I’m a team player so I did it without question. It’s always annoying when you have a car in front. You risk your victory by doing that. It was not easy to do, but I knew I had good speed on the straight.”

Magnus remains under investigation for an earlier move on Girolami’s team-mate Esteban Guerrieri at Turn 1, which forced Guerrieri into a wild half-spin. But the Belgian was up for the fight with Azcona and Girolami, and revelled in some terrific race craft in the latter half of the race.

“It was a nice race for the fans, which I’m happy about,” Magnus said. “Congratulations to Nat, it’s a team victory so that’s always cool. I had to be aggressive today. We’re quite far behind in the points so we have nothing to lose.

“So we needed to take some risks. Sometimes, like today, it pays off. First and third for the team… Not bad.”

Asked what else he needed to get ahead of Girolami, Magnus said: “Two more kph in a straight line. I was just coming short when he was moving over to defend on the inside line. I needed a better exit from the last corner.

“Maybe if the race had been a little longer I’d have had my opportunity. But I’m happy with my third place and we’ll see what we can do in Race 2 now.”