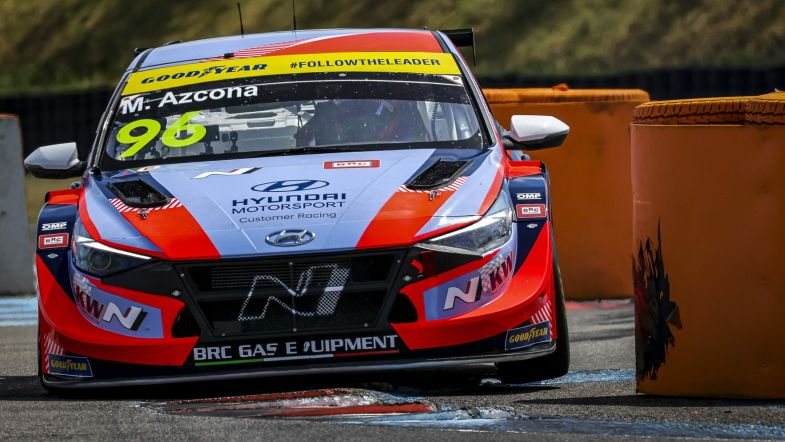 Azcona finished third at the end of the second race, having been let through by BRC Squadra Corse team-mate Norbert Michelisz in the closing stages.

Until then, Azcona had been embroiled in a frenetic scrap with Magnus, with the two swapping places twice before the former made his move finally stick at Turn 2.

For Azcona, the ferocity of the battle was ‘on the limit’ and believes that Magnus was taking too many risks.

“It wasn’t easy, especially with Gilles,” Azcona said post-race. “It was a tough fight and honestly he was fighting too much on the limit. I don’t like to fight this way, especially since I am fighting for the championship.

“In the middle sector I was a bit quicker and on the straights he was quicker. I tried the move but this track is very difficult and I didn’t really see the space [to pass], so I thought ‘let’s wait and see’. The next laps I saw he was struggling with the front tyres and I saw the space at Turn Six.

“It was a close battle and I lost the position again. He was attacking hard in Turn 14 and I got him in Turn 1 and braking for Turn 2.

“But the pace was good, we did some changes on the car because we expected warmer temperatures but I have to say that the team did a great job, the car was fanstastic. It’s looking very good for the championship.”

Earlier in the day, Magnus was in the middle of the action with Azcona and second-placed finisher Néstor Girolami. He ended up on the podium initially before being penalised five-seconds for contact made with Girolami’s team-mate Esteban Guerrieri.

Asked about his approach to the weekend, Magnus – who lies fourth in the championship albeit some way behind leader Azcona – said that he had ‘nothing to lose’.

“I had to be aggressive today,” said Magnus.

“We’re quite far behind in the points so we have nothing to lose. So we needed to take some risks. Sometimes, like today, it pays off.”

In the points standings, Azcona extended his margin over Girolami to 35 points, while Zengö Motorsport’s Rob Huff is third with 187 points following his race two victory.