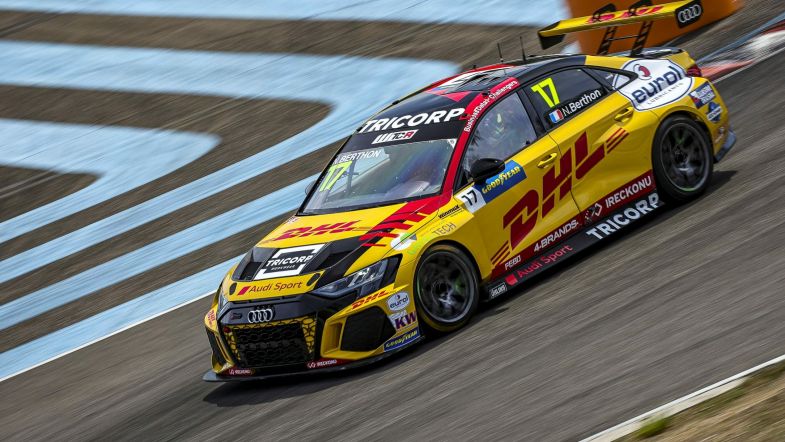 Berthon got the jump on Girolami off the line, sweeping into the lead at the fast first corner and was never headed thereafter.

The Audi RS 3 LMS driver came under pressure throughout but held onto his lead to come home 0.299s clear of Girolami’s Honda at the finish.

Gilles Magnus was the star of the race, finishing third, but the Belgian faces a post-race investigation after he made contact with Girolami’s Münnich Motorsport team-mate Esteban Guerrieri.

Girolami initially got a good start from pole but had to move across to fend off the faster-starting Berthon almost immediately. Berthon used the Audi’s strong straightline speed to power alongside the Honda before grabbing the lead at the first corner.

Behind, the BRC Squadra Corse Hyundai of Mikel Azcona nearly took second at the second corner but had to yield as Girolami held onto his line.

The order then settled for a few laps as overtaking opportunities were scarce in the early going.

Perhaps the fastest car on track at the time, Magnus was putting the pressure on Guerrieri in front, desperately trying to find a way past on the narrow, sinuous circuit but to no avail.

Eventually, Magnus – after trying to drive around the outside of the Honda at Turn 1 the previous lap – got down the inside at the same corner in an attempt to seize third place. But the Audi wasn’t far enough alongside at the apex and contact was made, sending Guerrieri into a spectacular half-spin between Turn 1 and 2.

Guerrieri’s recovery was brilliant, but the Honda was forced into the pits at the end of the lap to change tyres. He dropped to last but made up two places in the closing stages to secure a top 10 finish at the flag.

Despite a potential penalty hanging overhead, Magnus set his sights on Azcona for third and, after the Hyundai went slightly deep at the penultimate corner, the Audi dived to the inside of the final turn to take the position.

Azcona then made it back ahead of Magnus as the latter tried an audacious move around the outside of Girolami at Turn 2 for second, but Magnus responded straight away and reclaimed third – which he would keep until the end – at the very next turn.

Out front, Berthon was comfortable in the lead despite the attentions of the top eight which were separated by no less than two seconds throughout the race. Nevertheless, Berthon’s lead never looked in doubt and the Frenchman clung on to claim the win from Girolami, whose final lap surge brought him to within a quarter of a second at the flag.

Magnus finished third on the road but his place remains provisional pending the post-race investigation, while Azcona, who could inherit the podium, was fourth ahead of Hyundai team-mate Norbert Michelisz.

Zengö Motorsport’s Huff was a strong sixth in the end, finishing ahead of Comtoyou Racing’s Tom Coronel, who missed out on a top five finish after briefly taking to the grass in his battle with Michelisz.

Tiago Monteiro was eighth, with Dáni Nagy ninth ahead of Guerrieri. For Monteiro’s team-mate Attila Tassi, things turned sour in the closing stages as the Honda driver suffered a front-left puncture through Turn 1, sending the Civic Type R into the gravel at high speed.

Berthon’s team-mate Mehdi Bennani was the only other retirement, having made contact early on with Tassi.

Race 2 for WTCR is scheduled to take place later on today at 16:15 CEST.