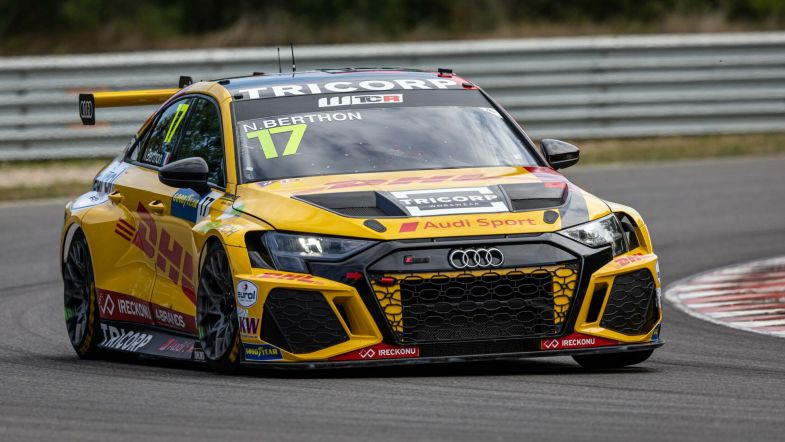 Nathanaël Berthon admitted he was “terrified of losing a win again” after being forced into tyre management during the closing stages of Race 1 at Anneau du Rhin.

The Comtoyou Racing driver led from the start after getting the jump on polesitter Néstor Girolami but failed to break clear of the chasing pack throughout the 22-lap affair.

Berthon then came under pressure from Girolami entering the final laps and the Frenchman revealed he had been suffering from severe tyre degradation which caused significant concern.

“[It was] very hard,” said Berthon in the official press conference. “I was managing [the tyres] since lap 1 I would say. I had a vibration with three laps to go.

“I was terrified of losing a win again. I’ve already lost a podium and a fourth position twice [this season]… A lot of points have gone for that reason and this time it would have been a victory. It would have been a disaster. Finally, the victory is home. I’m very happy, but it was very stressful.”

Berthon’s pace throughout the race was certainly good enough to keep the chasing pack behind him at crucial moments, even if the Honda of Girolami and the sister Comtoyou Audi of Gilles Magnus were lapping faster in the closing stages.

But the biggest element in Audi’s success so far in France, according to Berthon, is the strength in numbers and the reduced compensation weight across the weekend.

“We are a very good, very well-connected team and we work well together,” Berthon explained.

“The drivers, engineers, team manager… we’re always trying different stuff. We are four cars so we are going faster, for example, than Hyundai who have only two.

“Also we lost the 40kg [compensation weight] this weekend, so that helped. We are lucky there is a long straight here because the start was good, I could use the tow [from Girolami], we touched a little bit, but I was faster in the straight and I could manage the first corner easily.

“Then I saw the fighting behind, I could manage things a bit more and it’s super to get the victory.”