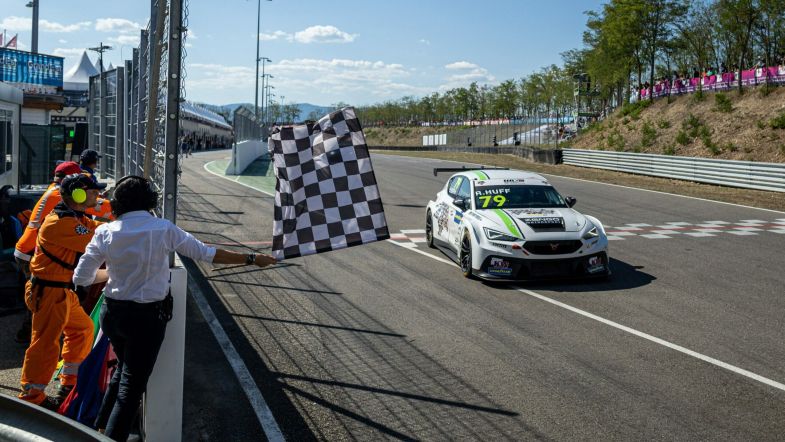 Zengö Motorsport’s Rob Huff says his team is “punching above our weight” after taking his second World Touring Car Cup victory of the 2022 season.

The British driver, who won the World Touring Car Championship in 2012, made it past the polesitting Mehdi Bennani off the line and maintained his lead throughout, despite coming under serious pressure from those behind.

Huff’s second win of the year means he is third in the drivers’ standings, a far cry from where he began the season when he had no firm programme in place.

“We’re massively punching above our weight,” Huff said in the post-race press conference.

“One week before the season started we didn’t think we were going to be racing. We did a day-and-a-half of testing and that’s all we’ve had this year.

“To be able to put in the results we’re putting in and getting the performances we’re getting is because of a team that’s totally glued together. It’s super-tight, super-motivated and there’s just no pressure.

“There were no expectations on us pre-season so to be where we are feels like we’re on the flying carpet and enjoying every moment. The job now is to push Mikel for the rest of the season.”

Huff put his victory down to getting the ‘best start I made all season so far’ which enabled him to hit the front early on. From there, the Cupra driver edged out just enough to take the win.

“Ultimately it came down to the best start I made of the season so far and probably one of the most important starts of the season,” said Huff.

“I just got it completely hooked up, got a good launch to get alongside Mehdi and I think he saw me coming so he didn’t try to close the door too much. I knew he was going to try to come behind me quickly to stop Norbi, but we were very fair and the first lap was just about seeing how the car was different because we’d changed it quite a lot.

“It was about exploring what we had and it took me three or four laps to get into a rhythm. At that point Mehdi was quicker than me and putting me under pressure, but it was about making sure I had enough of a gap so that he couldn’t have a cheeky look up the inside anywhere.

“As the race progressed I managed to get a few more tenths each lap and by the end it was seven or eight tenths. That was just enough to give me a bit of comfort.”

Huff has found himself unexpectedly in the title race versus points leader Mikel Azcona, and reckons the consistency shown this season has been the key factor in his championship position.

“We don’t want to make it too easy for him [Azcona],” said Huff.

“It’s exciting because Race 1 happens and we lose some points and then we gain them back in Race 2. I don’t think either of us has made a mistake this year.

“We’ve both finished every race in the points and that’s what it’s about. Ultimately we have to wait for the end of the season to see what’s going to happen, but we’ll keep pushing.”