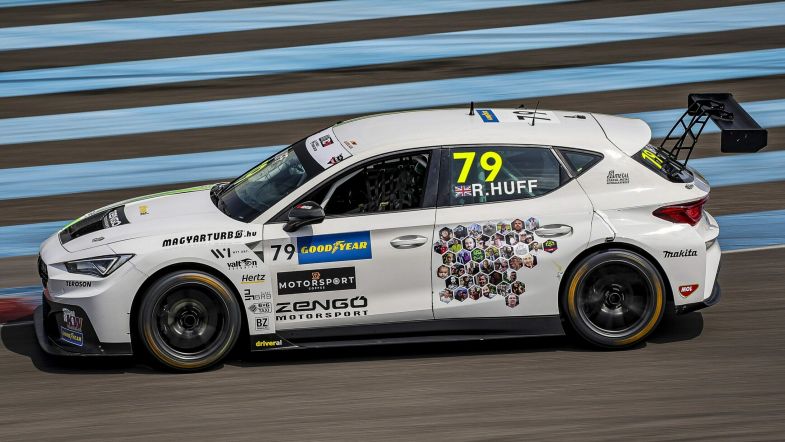 The Cupra León Competición driver started second on the grid but, like Nathanaël Berthon in the opening encounter, got the better start to leapfrog past polesitter Mehdi Bennani.

He then held onto his lead throughout the 18-lap race, with Bennani just hanging onto second place from BRC Squadra Corse’s Mikel Azcona.

Off the line, Huff made a strong start to pull alongside Bennani ahead of the first kink, where he made sure of his lead approaching the first corner.

Behind, Norbert Michelisz was third while his team-mate Azcona briefly took to the gravel after getting pincered by Gilles Magnus and Berthon.

Like in race one, Magnus’s Comtoyou Racing Audi was fast and it wasn’t long before he got past Tiago Monteiro’s Engstler Honda for fourth. The Belgian used his superior speed to drive around the outside at Turn 1, a move which Azcona repeated on the following lap.

Both Magnus and Azcona followed each other closer, with Michelisz somewhat providing the cork in the bottle in third.

Azcona then tried to get around the outside of Magnus at Turn 5, having pulled alongside on the exit of Turn 4. Small contact was made between the pair, with Azcona taking the position, but Magnus fought back immediately and reclaimed fourth under braking for the chicane.

The following lap, Azcona made certain his move for fourth by getting down the inside of Turn 2, after Magnus nearly lost the back of his Audi on entry. The resulting slide forced Azcona to stamp on the brakes and get his Hyundai sideways as well. More contact was made, but Azcona now had the position.

Huff, meanwhile, was beginning to open up a lead over Bennani, with the margin increasing to a fraction over one second entering the closing stages.

It came down to eight-tenths by the finish, but Huff was comfortable in victory.

Off the podium, Michelisz held off Magnus for fourth, while Monteiro headed brand mate Girolami.

Race 1 winner Berthon recovered from a terrible start to come home eighth, with Attila Tassi and Esteban Guerrieri rounding out the top 10; the latter surviving a heavy punt from Tom Coronel’s Audi at the penultimate corner.

The next WTCR race is yet to be confirmed, with the date and venue expected to be revealed next week.