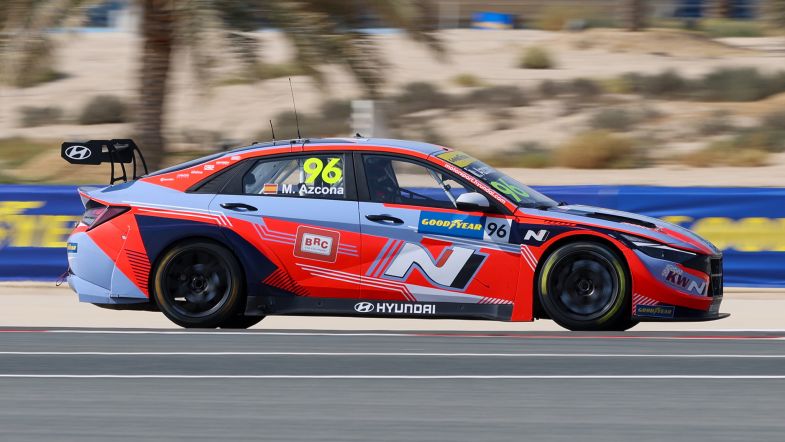 The two Cupras from Zengo headed to the pit lane at the end of the formation lap to avoid collision risks at the start. Comtoyou’s Gilles Magnus started from the back of the grid after an engine change.

Nicky Catsburg, driving the third Elantra, spun on the track on the first lap after tangling with Comtoyou’s Franco Girolami. Magnus also got hit, having to retire to the pits. Girolami received a ten-second time penalty for the incident.

The leading Hyundais soon opened a gap, with Girolami coming under fire from Berthon on lap three.

Race direction warned about debris on the main straight on lap four, with drivers going both sides to avoid them. Berthon took advantage to close on Girolami, overtaking for third place.

Catsburg started a recovery after his incident, climbing up to eight place and closed the gap to Münnich Motorsport’s Esteban Guerrieri on lap seven.

Catsburg overtook Guerrieri for seventh place at the start of lap eight, but out-braked himself at Turn 1, with the Argentinean recovering the position. The Dutch driver tried again, but Guerrieri won the fight in the twisted section of the track. But the Honda driver made a small mistake on lap ten, losing the position to the Hyundai.

Further ahead, Coronel overtook Bennani and, on lap ten, claimed fourth position from Néstor Girolami. The Audi driver charged ahead in pursuit of Berthon.

Catsburg continued moving forward, closing the gap to Bennani on lap 13. The Hyundai driver overtook the Moroccan on the following lap, with Néstor Girolami his next target with just two laps to go.

Azcona won at the line ahead of Michelisz and Berthon, followed by Néstor Girolami and Catsburg. Coronel was sixth after receiving the time-penalty, with Bennani in seventh place ahead of Guerrieri, Tassi and Viktor Davidovski (Audi RS 3 LMS) completing the top ten.

“I did a good start, that was the key of the race, because I was a bit worried about Berthon (Audi), but I saw he was down and behind so, from this point I had a good management with Norbi,” said Azcona after the race. “Very good team job from everybody, it’s looking much better for the championship.”

The Spaniard has now increased his lead in the championship with 281 points, 53 ahead of Néstor Girolami.