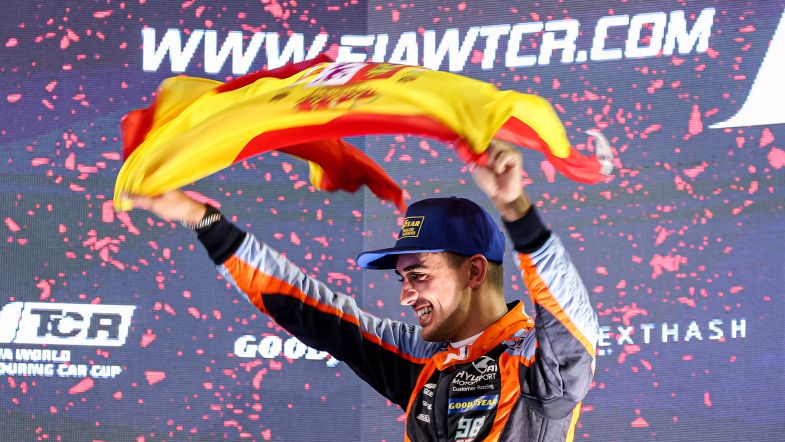 Hyundai driver Mikel Azcona claimed his fourth FIA WTCR victory of the season in Race 1 at Sakhir and extended his championship lead, despite tyre degradation issues.

“Even though we were racing in night conditions the track temperature was high and you started to feel the big degradation on the front,” explained Azcona.

“From the start I tried to do my best and I saw very quickly that Nat (Berthon) was having some problems,” the Hyundai driver explained. “For me it was much better going into Turn 1 and that was the key of the race.

“From this point I was trying to have good control of the car, trying to avoid the big kerbs and trying not to have any problems on the tyres especially,” added Azcona. “It was very tough, especially because of the high temperature inside of the cockpit.”

Azcona’s victory, together with Néstor Girolami’s struggling to finish in fourth place, allowed the Spaniard to extend his championship leadwith 281 points, 53 over the Argentinian.

“We increased our lead over Girolami and obviously for the team,” added the BRC driver. “Having Norbi second as well is very good for the manufacturers’ standings and increasing our lead.”

Saturday’s Race 2 is scheduled in the daytime, with Azcona expecting more issues due to the hot conditions at Sakhir.

“Tomorrow in the morning will be I think much more difficult because of the high temperatures,” concluded Azcona. “If we have suffered today tomorrow morning will be tougher.”