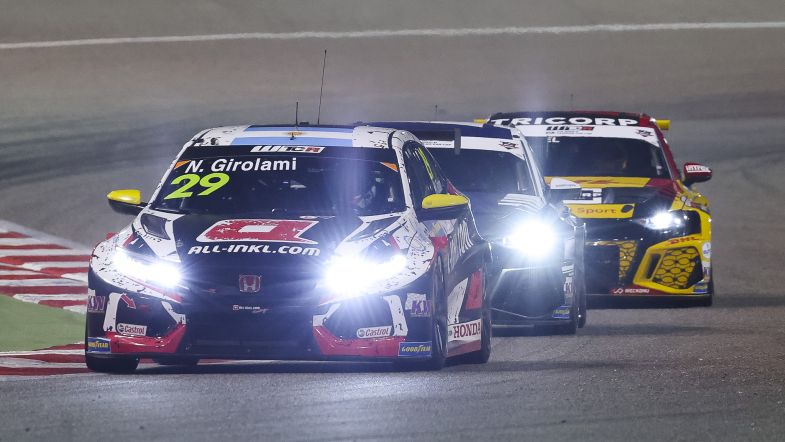 Néstor Girolami: “We suffered with the lack of speed”

Münnich Motorsport’s Néstor Girolami could only manage to finish in fourth place in FIA WTCR Race 1 at Sakhir, with his progress hampered by the 40-kilo ballast aboard his Honda Civic Type R TCR.

“I think everyone could see the lack of speed today in the race,” Girolami told TouringCarTimes. “We can put one good lap but, in the race, with the kilos, specially with the long straights, we don’t have the performance of others, and we suffer a lot when we visit this kind of track.”

Girolami had pulled a good effort to qualify in third place on the grid. But the situation changed in the race, with “Bebu” gradually losing ground.

“So we knew that we tried to do our best in qualifying to get a good spot for the main race, because it’s less hot than tomorrow,” added the Honda driver. “Tomorrow will be worse.”

Girolami was able to keep third place in the initial stages of the race, but lost out against a recovering Nathanäel Berthon (Audi).

“I was able to control to keep fourth position, because I knew that Coronel had a penalty, so I ddin’t want to block him and lose time to the guys we had behind,” added the Münnich Motorsport driver.

Girolami is second in the drivers’ standings, 53 points behind Hyundai’s Mikel Azcona, winner on Friday.

“In the end it was a good result, not what we want, because we want to race against Hyundai and Azcona, but they were on another level today,” concluded Girolami.