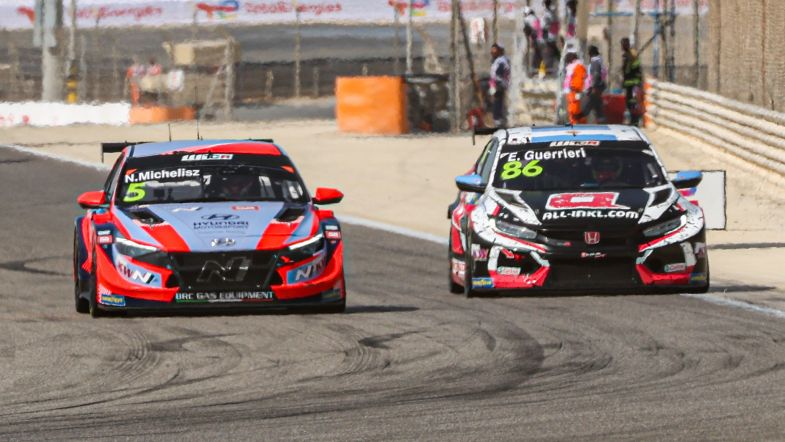 Esteban Guerrieri: “It was a very good move from Norbi”

Münnich Motorsport’s Esteban Guerrieri scored a podium finish in Race 2 at Sakhir after a weekend in which, due to the Honda Civic Type R TCR carrying the maximum success ballast, the team didn’t expect good results.

Guerrieri started from the third spot on the grid and managed to avoid the Turn 4 incident involving the leading Audis of Franco Girolami and Mehdi Bennani to take the lead.

“The start was key because yesterday we didn’t have a great start and it’s so tight at the first corner that if you are like catching up to the first corner it’s hard, so it’s better always to make a good start, even more at this track,” the Argentinian explained. “I managed to do a run around the outside, very late braking and on the outside it worked well.”

Hyundai’s Norbert Michelisz sat in second place, with Guerrieri aware that he posed a threat to his lead.

Michelisz overtook for the lead on lap five, with Guerrieri admitting he didn’t expect the move so soon.

“I knew he was catching up but with dirty air it was going to be hard for him,” added the Münnich Motorsport driver. “It was obviously going to be harder for me because we knew they had a better car, a better pace this weekend. But fair enough for him, he surprised me completely into the braking. It was a very fair move. I didn’t let him by, he just surprised me.”

“I’m happy anyway to be back here in the press conference, on the podium,” concluded Guerrieri. “We deserved the podium for all the guys on the team and let’s try to finish the season on a high. I really want to again get good points, which wasn’t happening in the last few events.”