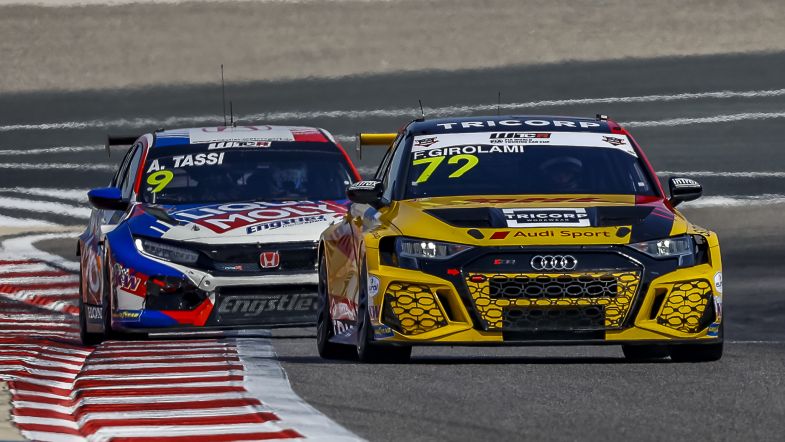 Franco Girolami: “I could have been on the podium”

Franco Girolami made his FIA WTCR debut at Sakhir driving an Audi RS 3 LMS from Comtoyou, with the Argentinian driver completing a solid overall performance.

“It was a positive weekend, with a lot of learning, which in the end was left with a little taste,” Girolami told TouringCarTimes.

For the newly crowned TCR Europe champion, it was not only his world debut, but also the first time competing at Sakhir: “With the Comtoyou team we prepared a lot this weekend, and I personally knew that I would have a very high level of drivers and teams.

“Added to that, we had to use a totally new tyre for me,” said the Comtoyou driver in reference to the Goodyear tyres used in the WTCR, as opposed to Kumho in TCR Europe.

Girolami qualified in ninth place for the grid, guaranteeing a front-row start for the reversed-grid Race 2 on Saturday morning.

“In qualifying the goal was to get to Q2 and try to be in the top ten, and we were able to do it,” added Girolami. “We completed a very good lap being in 9th place.”

Disaster hit for Girolami as he was involved in the opening lap incident in Race 1, with the Audi driver receiving a ten-second time-penalty.

“Then in race 1, starting from ninth position, I was able to make a good start beating Guerrieri (Honda), who then overtook me again, and I made an excess at Turn 8 hitting Catsburg (Hyundai),” explained Girolami. “Then I made up positions to 9th place, but I suffered a penalty for that incident.”

“In Race 2, due to the inverted grid, I started from the 2nd position, after the start Guerrieri managed to overtake me, and arriving at Turn 4, I suffered an impact on the rear of the car that sent me directly off the track,” added the Comtoyou driver. “I was back in the last position, and thanks to a great pace of the car, I was able to recover from P15 to reach P7.

“In general, Race 2 was very positive, but I think that if I had not received the contact, it would have been to finish on the podium and thus achieve a great weekend for me in sports terms and also for the Comtoyou team who trusted me,” concluded Girolami, who will be again in the WTCR grid for the final event of the season at Jeddah.