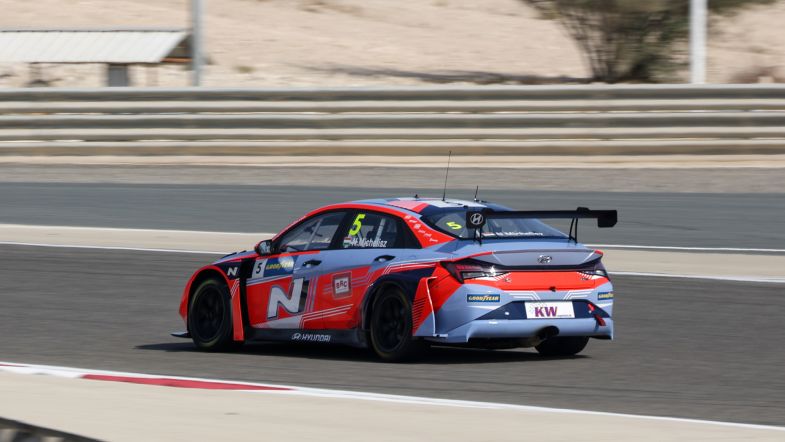 BRC Racing Team driver Norbert Michelisz claimed his first victory of the 2022 FIA WTCR season in the final race of the weekend Sakhir in Bahrain. His team-mate Mikel Azcona crossed the line in fourth place, increasing his advantage in the championship to 60 points.

Comtoyou Racing drivers Mehdi Bennani and Franco Girolami shared the reverse grid front row while the Cupras from Zengo Motorsport repeated Friday’s action of heading to the pit lane at the end of the formation lap to avoid start incidents.

At the start, Bennani took the lead but Esteban Guerrieri of Münnich Motorsport charged ahead on the outside of Turn 1 to overtake for first place.

Comtoyou’s Gilles Magnus tried an impossible move on the inside at Turn 4, hitting Bennani and collecting Franco Girolami in the process. The Belgian driver would retire due to the incident.

The Hyundais of Norbert Michelisz and Nicky Catsburg were able to pass the incident to take second and third ahead of Comtoyou’s Nathanäel Berthon, Münnich Motorsport’s Néstor Girolami and championship leader Azcona.

Azcona attacked Girolami at Turn 1 on lap three, but the Argentinian managed to defend fifth place. The Spaniard repeated the attack on the following lap, getting ahead at the main straight but with Girolami coming back and both side-by-side for half-a-lap, allowing Comtoyou’s Tom Coronel to close the gap to the pair.

Michelisz overtook Guerrieri for the lead at Turn 1 on lap five as Girolami came under fire from Coronel, who also took sixth place from the Argentinian driver.

Berthon received a five-second time penalty for gaining a position while going off track. Franco Girolami overtook his brother Néstor for seventh place on lap eight.

Azcona caught up with Berthon on lap ten, as Néstor Girolami started suffering the attacks from Bennani. The Moroccan tried the outside at Turn 1 on the final lap, but the Argentinean defended as both went side-by-side for most of the lap.

Michelisz took his first victory of the season ahead of Guerrieri, with Catsburg in third place. Azcona was fourth, followed by Berthon who finished fifth after his time penalty.

“It was a bit difficult at the start, there was some carnage and I overtook some people there,” Michelisz explained after the race. “My car was perfect today, so I’m very pleased, thank you everyone at the team.”

After the races at Sakhir, Azcona leads the championship on 297 points, 60 ahead of Girolami.

The next round of the FIA WTCR, which will be the season finale, takes place at Jeddah in Saudi Arabia on November 25-27.