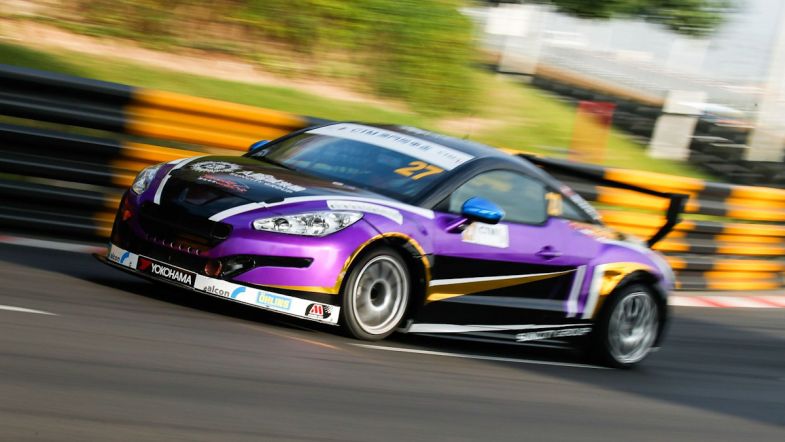 Poon started from pole positon ahead of de Souza, with the pairs’ team-mates Samson Fung and Jeronimo Badaraco starting from row two.

Fung briefly pulled ahead of de Souza, but the Chevrolet driver was quickly back ahead.

Just behind them, Leong Chi Kin crashed out in is Fu Lei Loi Racing Peugeot RCZ at Mandarin on the first lap and was collected by the rival Peugeot of Patrick Chan driving for Gau Gei Racing.

Leong’s car was recovered before the field came around again, while Chan tried to continue despite severe damage to the front his his RCZ, and was eventually given a mechanical black flag.

Badaraco’s race ended at the end of the first lap, with the Chevrolet driver pulling into the pits to retire from fourth position, promoting Celio Alves Dias to third.

Paul Poon held the lead ahead of Filipe de Souza’s Chevrolet Cruze, and the Hong Kong driver was fighting hard to defend against the Macanese driver.

Falling behind was Poon’s team-mate Samson Fung, who was running alone in third when he locked up on the way into Mandarin on lap three and hit the wall hard, ripping a wheel off of his RCZ.

The safety car was deployed, with de Souza briefly squeezing ahead of Poon under the yellow flags, but quickly returned the position.

The race didn’t last one corner when it was restarted on lap six, as the Son Veng Chevrolet of Cheong Chi Hou smashed into the SS Racing MINI Cooper of Zhang Han Biao at the Reservoir bend, with both cars shedding debris across the main straight as they came to rest, with the safety car immediately deployed again.

It took a further three laps to recover the stricken Chevrolet and MINI, with the race restarting on lap nine.

One lap later, and Alex Fung took third from Alves Dias’ MINI on the way to Lisboa to claim the final podium spot, while the lead pair continued to pull away and put on a great display as Poon battled to defend against de Souza’s Chevrolet.

The Chevrolet had the pace through the mid-section of the track, but the Peugeot was able to pull away out of Fishermans’ Bend and be safety out of range before the main passing point at Lisboa.

Poon crossed the line after 12 laps just half a second ahead of de Souza to win the race, with Fung completing the podium.