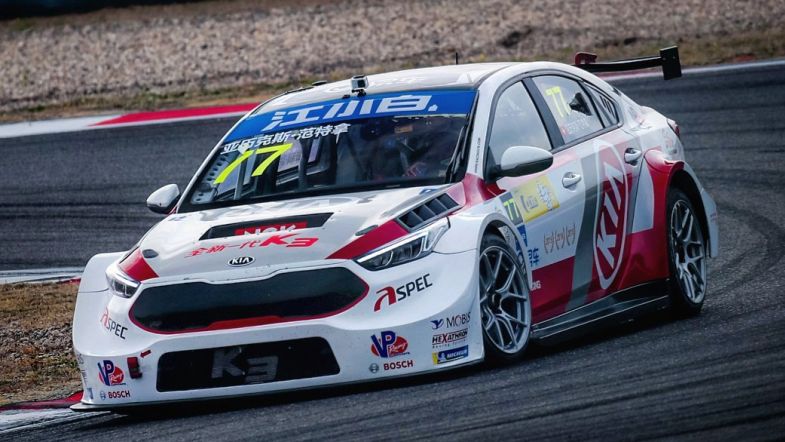 Dongfeng Kia Racing Team’s Alex Fontana took his first victory of the 2019 Chinese Touring Car Championship in the opening race of the final round at Wuhan, which was interrupted by a big roll for Colin Turkington.

He beat his Dongfeng team-mate Leo Yi Hong Li by just under three seconds at the flag, but only inherited second place at the penultimate corner as Rodolfo Avila suddenly slowed.

Fontana said post-race: “It is one of the few street races where my car is fine so I am happy with how the race went today. The safety car restart really us as we were able to run one and two. After the first start, it was a really clean race for us and we were able to just keep it clean and build the gap.”

Fontana started the reversed-grid race from pole position after setting the eighth quickest time in qualifying and duly led off the line into the first corner. He was followed into the first sequence of corners by the BAIC Senova D50 of Adam Morgan before chaos ensued behind at Turn 7.

Reigning BTCC champion Turkington started in the middle of the pack and as the field navigated the tight left hander, the SAIC Volkswagen 333 Team driver was caught out by his team-mate Zhang Zhedong, making contact to the rear.

Turkington was then rear-ended by the second of the Dongfeng Kia Racing Team K3s of Zhang Zhiqiang, which caused Turkington to roll onto its roof and bring out the red flags.

Multiple cars were involved and several suffered race ending damaged such as Adam Morgan, Andy Yan and Jason Zhang. These three plus Turkington understandably did not take the restart.

Despite this, Fontana led away again at the restart and quickly built a healthy lead out in front, as the rest of the field squabbled among themselves.

Hong Li held off several attacks from Avila in the initial stages but was unable to withstand the pressure put on him by Avila’s Changan-run Ford Focus 2.0T.

After a handful of attempts, Avila finally made it down the inside of Hong Li at Turn 1 to take second, which he held right until the final lap of the race.

It was a five-car battle for second place which lasted throughout the race. At the rear of this train, Rainey He showed good pace but was unable to do anything about the Guangzhou Toyota Racing Team Corolla of Liu Yang in front of him for fifth.

He tried an audacious move to the inside of the penultimate corner, only to lock the brakes heavily which caused him to cede the place.

At the front, Fontana was untroubled en route to a comfortable victory by 2.677 seconds over Hong Li, while Zhen Dong was elevated to third at the line.

Behind Avila in fifth came He, who eventually got by Yang, while David Zhu finished seventh for BAIC Senova Racing Team.

Jim Ka To and Juan Carlos Zhu were next up, with Zhang Han Biao completing the top ten.

The second segment of the race was less dramatic than the first, with just the three retirements. Fun Junfei (SAIC Volkswagen 333 Racing) pulled into the pits at the end of the first proper racing lap, while Wang Risheng stopped on track mid-race.

Martin Cao was another non finisher in his Dongfeng Kia.

Race 2 at Wuhan is scheduled to take place tomorrow at 12:20 local time.