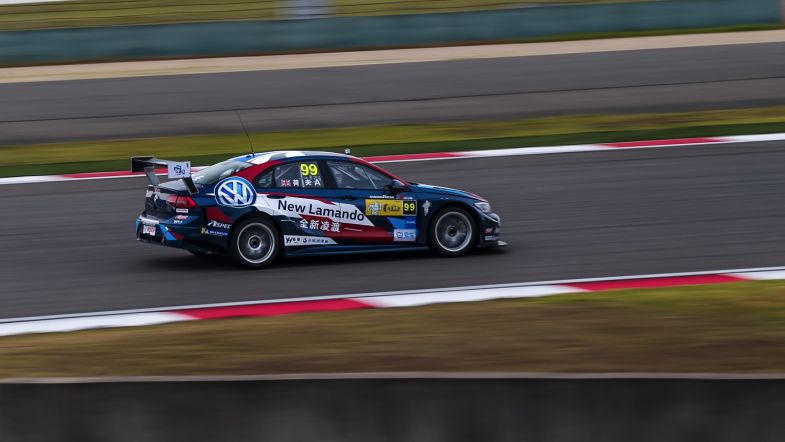 Pole sitter Huff had initially lost out to the faster-starting Oriola off the line, and had to settle for second as the field rushed into the first corner.

The pair quickly escaped the chasing pack, with Oriola just staving off an early assault from Huff in the first two corners.

But Huff made a decisive move at the same corner on the sixth lap of ten to force his way into the lead, while Oriola ran wide. The Spaniard eventually retired on the main straight with two laps to go due to a power steering failure that started early in the race.

Oriola’s misfortune meant that Rainey He finished up second, ahead of three-time CTCC champion Andy Yan, both in Changan-prepared Fords.

The race was less hectic than Saturday’s opener, but the concertina effect of Turns 1 and 2 still allowed for bumping and barging between cars, with Rodolfo Avila an early casualty; the SAIC Volkswagen 333 Racing car got tapped into a half spin at Turn 1 and then a full spin on the exit of Turn 2.

Avila dropped to the back of the field but made a superb recovery to finish eighth by the end.

Oriola and Huff broke clear early on, with the Spaniard never holding more than a second’s margin over the WTCR regular Huff.

Huff tried his first move on Oriola at the end of the back straight as the pair braked for the hairpin, but Oriola made sure the door was firmly closed on entry.

The gap having come down to less than two-tenths of a second, Oriola then briefly edged further ahead, extending the margin to a somewhat more comfortable seven-tenths, but Huff didn’t wait long before launching another attack.

That came on the sixth lap as the Brit closed under braking for the hairpin before making a cut-back on exit. The pair ran side-by-side into the final corner, with Oriola giving just enough room on exit.

Huff then had the inside line for Turn 1 and took the lead as Oriola ran wide and eventually dropped behind his Ford team-mates He and Yan to fourth.

Oriola then fell back to fifth towards the end and ultimately retired on the penultimate lap with suspected tyre issues.

That allowed Zhang Zhen Dong to assume fourth ahead of the Kia trio of Alex Fontana, Martin Sao and Jason Zhang.

Avila’s comeback to eighth was also completed due to Oriola’s retirement, while Liu Yang and Juan Carlos Zhou rounded out the top ten.