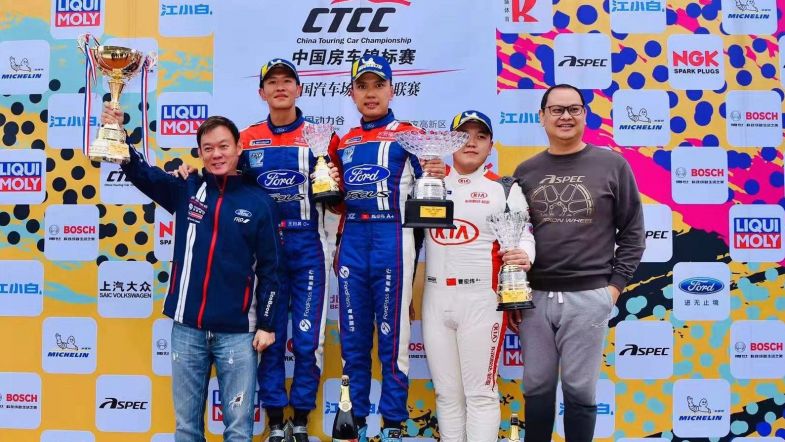 Zhang Zhen Dong started from pole after the top 12 in qualifying were reversed for a race which started in wet conditions.

Juan Carlos Zhu made a superb getaway from third on the grid to jump straight into the lead by the time the field got to the first corner, while Yan dropped to third.

Yan found a way past Dong on the exit of Turn 3 before setting about trying to overhaul Zhu for the lead.

The former Teamwork Huff driver did not have to wait long before he assumed the lead at the start of the second lap, with a bold move around the outside move of Zhu at Turn 4.

Yan quickly built a reasonably comfortable gap of just over a second from Zhu, who had to fend off the attentions of Cao behind.

Cao had worked his way up from fourth on the grid and completed a great move around the outside of Wong at Turn 1 on the second lap.

Avila first passed Hong Li on the inside of Turn 6 before the latter quickly asserted his position on the next corner. The following lap, Hong Li botched an attempted overtake on Avila, which allowed Avila to make his move on Zhen Dong.

Zhu’s race ultimately brought the race to an early end after he had contact with another car. His BAIC Senova D50 suffered heavy front-end damage and forced the safety car to come out with half the race left.

Such was the struggle to remove Zhu’s car, the race ended under yellow, with Yan winning from Cao.

Off the podium in fourth was Avila, ahead of BTCC champion Colin Turkington and Jason Zhang. Liu Yang was sixth, with Zhang Dasheng seventh.

Pepe Oriola was only 16th in the end, but will start tomorrow’s second race from pole position after topping the morning qualifying session. He will start alongside Jason Zhang on the front-row, while Turkington lines up third.