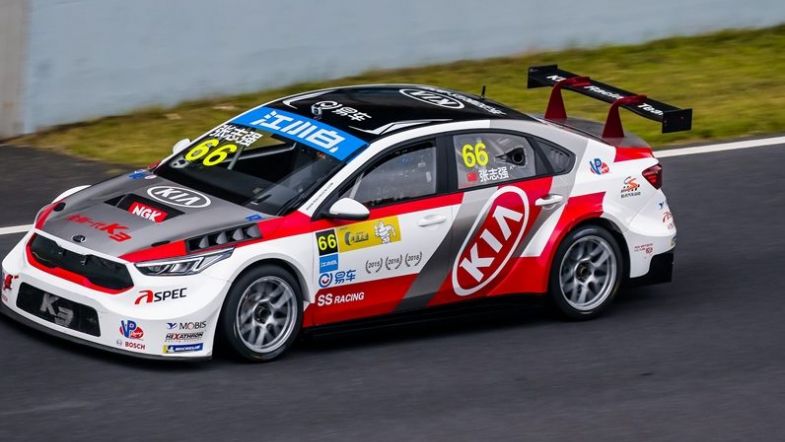 Jason Zhang made the most of a brilliant getaway off the line to head a Dongfeng Yueda Kia Racing Team one-two in the final Chinese Touring Car Championship race of the weekend at Zhuzhou.

Zhang got the jump on pole-sitter Pepe Oriola’s Changan Ford FRD Team Focus 2.0T into the first corner, with the latter losing another place to BTCC champion Colin Turkington on the exit.

Oriola managed to find a way back past Turkington on the third lap of 15, but Zhang had already made his escape by over four seconds, which he continued to extend throughout the race.

The consistent pace of Zhang out front meant that the Kia gradually gapped Oriola behind to the rate of half a second per lap. By the mid-point, Zhang’s lead had grown to six-and-a-half seconds as Oriola fell into the grasps of the other Kia of Martin Cao.

Cao started fifth, but used his superior pace in the opening stages to move up to third, ahead of Turkington.

He then closed onto the back of Oriola with three laps to go before making his move on the Ford Focus to take second.

The order remained unchanged until the flag as Zhang headed Cao to the line by 12.706 seconds, with Oriola a further 1.6s adrift.

Leo Yi Hong Li made it three Dongfeng Yueda Kia inside the top four with a place just off the podium, getting the better of Turkington in the closing stages.

Zhu David came out on top in an entertaining battle for eighth place between himself, FRD’s Andy Yan and the 333 Volkswagen of Zhang Zhen Dong.

Yan held eighth for much of the early stages but slipped back a place as David took both Yan and Zhuowei in the same corner.

Oriola’s Ford FRD team-mates had a more difficult race as Sunny Wong and Rainey He could only managed 12th and 14th place respectively.

Following his heavy contact in Race 1, Juan Carlos Zhu was a non-starter.

The next CTCC race takes place on November 23-24th at Shanghai.