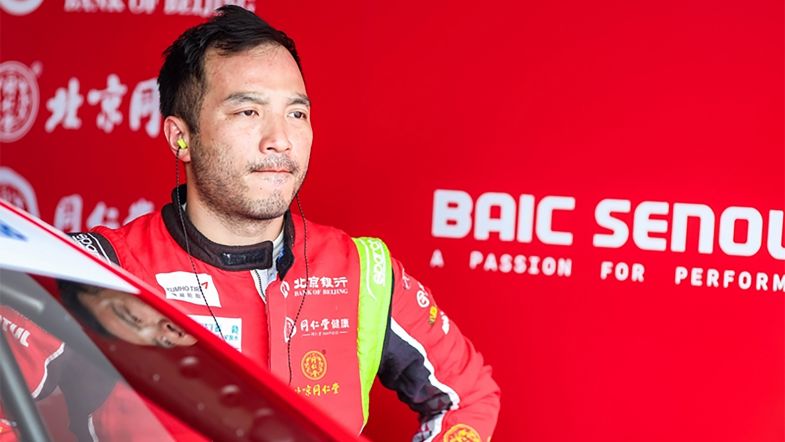 Darryl O’Young held on from the reversed grid pole position to claim his first win of the year for the BAIC Senova team, just managing to stay ahead of Pepe Oriola’s Changan Ford, who put on a storming performance to go from 11th to second in the nine-lap race at Ningbo International Speedpark.

O’Young started from pole for Race 1 courtesy of a top-11 reversed grid draw which was made by Race 2 pole-sitter Pepe Oriola after the qualifying session in the morning.

The Hong Kong driver led the way in his BAIC Senova D50 at the start, running ahead of the Kia K3 2.0T of Alex Fontana, while there was trouble at Turn 2 as the SAIC Volkswagen of Rodolfo Avila was spun out in contact with the Ford of Rainey He in the mid-pack.

Further on the opening lap, Martin Cao’s Kia half-spun Andy Yan’s Ford as he was battling for sixth, allowing Oriola to climb through and move up to seventh behind Cao, passing the Kia driver before the end of the lap and was already up to sixth place by the end of lap two.

Up front, O’Young was still fighting to hold back Fontana who had championship leader Zhang Zhen Dong’s SAIC Volkswagen right on his tail.

Oriola was up to fifth on lap four after passing Juan Carlos Zhu’s Senova, and was closing on the rear of his brother David’s car.

The move was made a lap later, with Oriola now fourth, with 333 Racing Volkswagen driver Zhang his next target.

Just behind, Andy Yan made a move up to sixth to pass Juan Carlos Zhu in the #2 Ford Focus 2.0T on the same lap, with the Fords showing improved pace.

On lap six, Oriola dived up the inside of Zhang’s Lamando GTS relatively unchallenged to move up to third, while there was trouble for 2017 champion David Zhu, whose Senova stopped on the side of the track while he was running in fifth.

Oriola made his way past Fontana’s Kia on the penultimate lap, but was now two seconds behind O’Young’s car with little time left to make up the gap.

O’Young went on to take the win, just four-tenths of a second ahead of Oriola’s Ford, with Fontana completing the podium.

Andy Yan completed a strong result for the Changan Ford FRD Team with fourth, while Martin Cao made a last-lap pass to grab fifth in his Kia from points leader Zhang Zhen Dong’s Volkswagen.

Juan Carlos Zhu was seventh for BAIC Senova, with the Kia of Cui Yue, and the Volkswagens of Rodolfo Avila and Wang Rue completing the top ten.