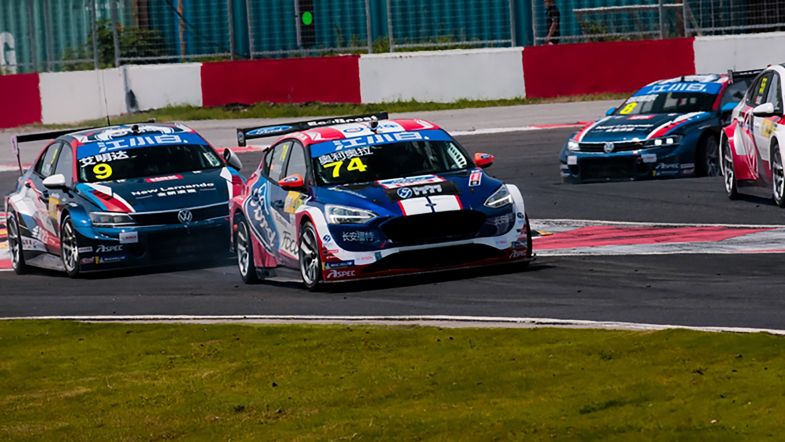 Pepe Oriola has claimed his first win in the China Touring Car Championship, leading the second race of the weekend from lights-to-flag, finishing ahead of Changan Ford FRD team-mate Andy Yan, with Martin Cao completing the podium for Dongfeng Kia.

There was trouble for the #11 Ford Focus 2.0T of Jim Ka To, who was due to start from fourth, as his car stopped on the formation lap and was pushed away.

At the race start, Oriola led the way from pole position and into Turn 1 ahead of Yan, with Rodolfo Avila holding third in his SAIC 333 Racing Volkswagen ahead of the fast-starting Kia K3 of Martin Cao, who moved up to fourth ahead of Rainey He’s Ford.

Yesterday’s race winner Darryl O’Young was spun out early on, with the BAIC Senova rejoining at the back of the pack, while Cai Yue’s Kia retired on lap two with a broken wheel.

Oriola, Yan and Avila ran close together for the opening laps, before all three began to separate themselves out, and then Avila found himself under attack from Cao’s Kia.

Cao made his move at the end of lap ten, cutting across the Macanese driver’s front and damaging the splitter of his Volkswagen Lamando GTS.

Three laps later and Avila slowed out of position entirely, promoting Rainey He to fourth in his place.

Oriola went on to win the race unchallenged by 3.5 seconds over Yan, with Cao third.

Rainey He was fourth ahead of the two Senovas of David and Juan Carlos Zhu, with championship leader Zhang Zhen Dong the best-placed of the SAIC Volkswagens in seventh, ahead of team-mate Wang Rue.

Sun Chao, in the Guangzhou Toyota Corolla was ninth ahead of Alex Fontana’s Kia K3.

The next round of the championship takes place at Zhouzhou on October 26th-27th.