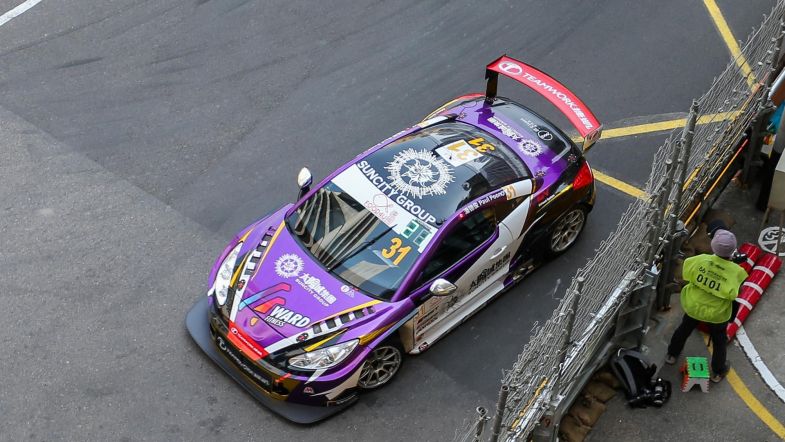 Peugeot driver Poon claimed the lead at the start and never looked back, instead it was his team-mate Fung who had to defend from a furious attack from T.A Motorsport driver and Macau veteran Filipe De Souza.

Mini drivers Celio Alves Dias and Chi Kin Leong came together at Fisherman’s Bend, resulting in major damage and a retirement for both drivers.

The safety car headed in with five laps left, but it was not long until it was back out again.

This time it was due to three separate incidents with Mini driver Rui Manuel Valente being pushed into a spin by Mitsubishi driver Chi Kong Tsang at the exit of Lisboa and Mini Driver Weng Kuai Lam spinning at the exit of Hospital.

Teamwork Motorsport driver Cherry Young stopped on track at the San Francisco Hill due to technical issues with her Subaru.

The safety car went into the pits with two laps left and Audi RS 3 LMS driver De Souza put in a tough attack on Fung going into Lisboa.

De Souza tried to pass the Peugeot driver on the outside of Lisboa, but could not make the move stick and almost clipped the wall at the exit.

The T.A Motorsport was all over the back of Fung shortly after, only for the safety car to be called out for a third and final time on the last lap as Mini driver Man Kit Lui had stopped on track.

Poon won the race by 0.935 seconds ahead of team-mate Fung, with De Souza claiming the overall third position of the race and the 1950cc class victory.

Ian Veng Leong made an impressive drive from 12th on the grid to finish fourth overall in his Mitsubishi, claiming second place of the 1950cc class.

Luciano Castilho Lameiras finished fifth ahead of Chevrolet driver Weng Tong Chan while Wong, who held third place at the start of the race, dropped back to finish seventh in his Mitsubishi Lancer.