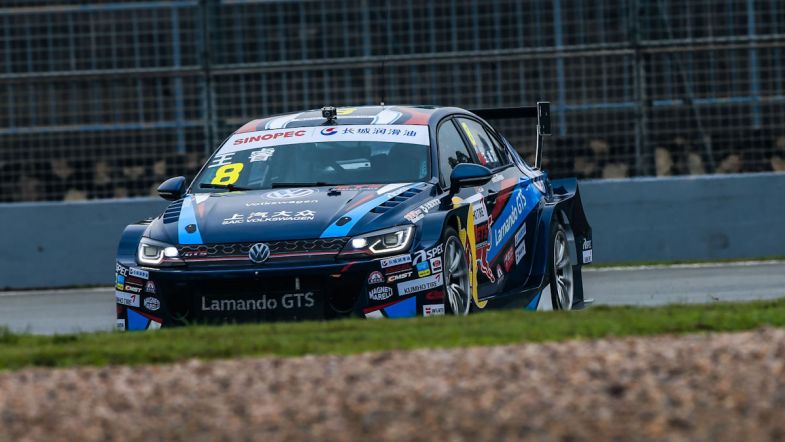 Shanghai VW 333 Racing’s Wang Rue had a perfect start to the 2017 China Touring Car Championship season during the first round at the Zhuhai International Circuit, taking victory ahead of David Zhu’s Senova D60, while battles raged on behind.

Rue led the way into Turn 1 ahead of the BAIC Senova D60 of Darryl O’Young, but O’Young soon lost ground to the Changan Ford Focus of Andy Yan, Jiang Tengyi’s Volkswagen and team-mate David Zhu’s Senova, which all made their way past the Hong Kong driver.

Avila and O’Young then made contact soon after, with O’Young spinning across the track and Kia’s Jim Ka To ending up in the gravel in avoidance.

Tengyi would work his way up to third position, but Andy Yan made a charge around the outside and made contact, with the Ford driver then attacked on each side by both Tengyi and Avila, with Avila now up to third.

Rue won the race just under a second clear of Zhu’s Senova, with Avila nine seconds back, with two Volkswagens on the podium.

Tengyi would finish three seconds behind with Andy Yan the best-placed of the FRD Team Fords in fifth, leading team-mates Rainey He and Martin Cao.

Zheng Zhen Dong was the fourth-best of the Volkswagens in eighth, with Juan Carlos Zhu ninth for the BAIC Senova team with Daniel Lloyd completing the top ten on his CTCC debut.

Jason Zhang was the best of the Kias, just missing the top ten in 11th, while the best placed of the Chinese Haima Racing team was He Zi Yian in 12th.