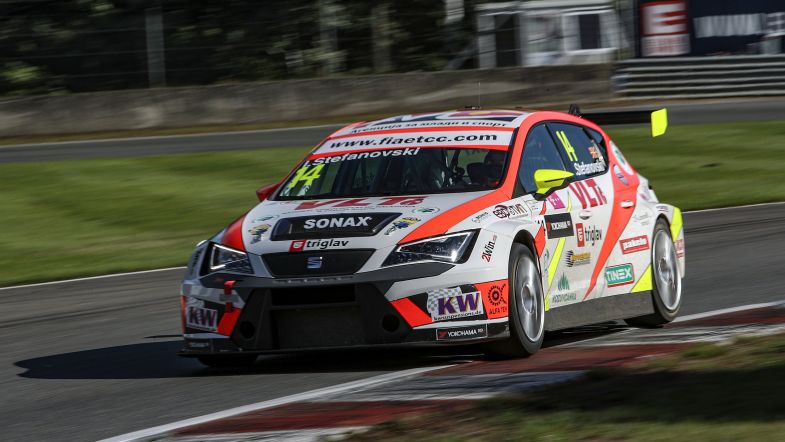 Igor Stefanovky has taken his second win of the 2017 European Touring Car Cup season, leading from pole position in his SEAT León TCR and finishing ahead of the Honda Civic of Peter Rikli and championship leader Petr Fulín.

Stefanovky started on pole courtesy of the reversed top eight grid ahead of Zengo Motorsport’s Anett Gyorgy. The Macedonian got the jump on the Hungarian at the start and led the way into Turn 1, as the SEAT of Andreas Pfister and Honda’s Peter Rikli both passed her for second and third.

Rikli was soon up to second ahead of Pfister, while team-mate Christjohannes Schreiber was also on a charge, moving up to fourth ahead of the SEAT of Fabio Mota at the chicane on the first lap, but as the ASK GM Racing Audi of Rudolfo Pesovic tried to pass Mota’s LEIN SEAT at the final corner, the Serbian lost control and slid into Schreiber’s Honda, knocking him into the gravel trap.

Pesovic continued on but didn’t realise his front-left suspension was now broken, and careered off the track and half-rolled his car at Turn 1 as he slammed into the barriers, with the race held behind the safety car for four laps.

When the race restarted, the Kraf Racing Audi of Plamen Kralev then knocked Fabio Mota wide at Turn 1, before cutting the chicane as he passed the SEAT of Andreas Pfister to move up to fourth.

Christjohannes Schreiber was working his way up the order after he’d been recovered from the gravel trap and made it as high as fifth, but fell behind Norbert Nagy’s Zengo SEAT, who also closed down and passed the Audi of Kralev to claim fourth by the end of the race.

Stefanovky was untouched up front and won the race, his second after winning Race 2 at the Nürburgring Nordschleife in May, ahead of Rikli’s Honda and championship leader Petr Fulín, who now extends his championship lead to seven points over Schreiber, who finished seventh behind Pfister, heading to the season finale at Most in Czechia next month.