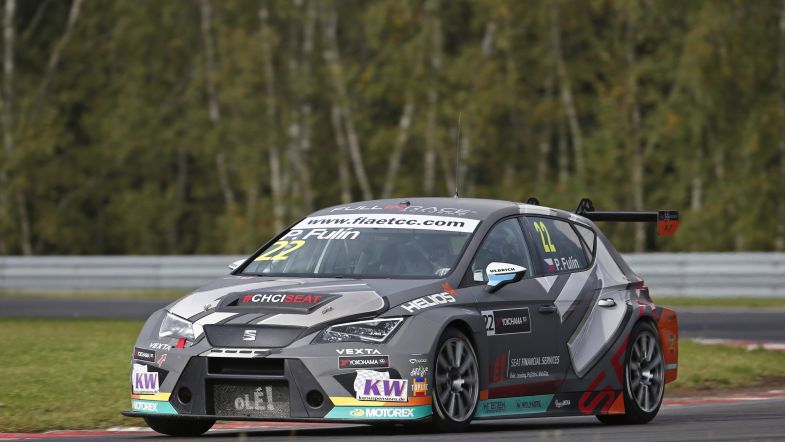 Petr Fulín wins home race and title at Most

Petr Fulín won his home race at Most, Czech Republic, which was enough to clinch the 2017 European Touring Car Cup title. The SEAT driver came home ahead of Audi’s Plamen Kralev, as title rival Norbert Nagy completed the podium.

Igor Stefanovski had initially taken the lead ahead of Volkswagen’s Vaclav Nimc, with Petr Fulín Jr. in third in his SEAT. Peter Rikli had team-mate Christjohannes Schreiber right behind him, the Honda driver progressing up to second quickly.

Schreiber attacked Stefanovski for the lead and on lap six, just when it looked like he could make his move stick, the two made contact, which resulted in the Honda Civic TCR being sent into a spin and into the wall. Fulín, who was in third, took the opportunity to jump up to the lead and never looked back.

There was more excitement as Kralev, who was in second, made a mistake on the following lap, which dropped him down to fourth behind Stefanovski and Nagy. The Hungarian, who was very much still in contention for the championship, started an overtaking move on the Macedonian on lap eight, but just when he looked like he could jump up to second he made a mistake under braking at the first corner, which allowed his rival back through to second.

Kralev overtook Stefanovski on lap 10 and jumped up to second, immediately followed by Nagy and Fulín Jr. Despite the Hungarian’s best efforts, Kralev managed to finish second behind Fulín, with Nagy completing the podium. Fulín Jr. continued his good form by finishing fourth ahead of Stefanovski. Nimc was sixth in his Volkswagen Golf GTI TCR, ahead of SEAT’s Fabio Mota and Andreas Pfister. Anett Gyorgy was ninth ahead of stable-mate Petr Cizek.

Although Fulín had won two ETCC titles, he had never managed to do so in a SEAT, as both of his championships were won in the S2000 class with a BMW 320si.