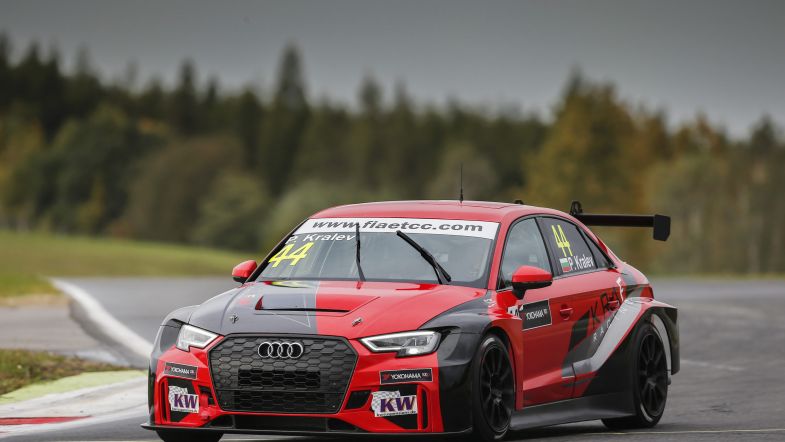 Audi’s Plamen Kralev won the first race of the weekend at Most, Czech Republic, on a damp track. The Bulgarian came home ahead of title contenders Norbert Nagy and Petr Fulín as the SEAT drivers completed the podium in an eventful race.

At the start Honda’s Christjohannes Schreiber briefly took the lead, as the Honda driver ended up sideways at the second corner due to the damp track. This left Nagy into the lead ahead of Fulín, with Igor Stefanovski in third ahead of Schreiber, who quickly lost ground to the three SEATs. Fulín took the lead on the second lap and looked relatively secure until the seventh lap.

On lap seven, Stefanovski pulled off a successful move on Nagy at the first corner, but the Macedonian went too deep at turn 2 and sent race leader Fulín sideways, which handed Nagy the lead ahead of Stefanovski and Fulín. The Macedonian overtook the Hungarian for the lead at the last corner. Meanwhile Kralev had managed to close the gap as the leading trio lost time fighting, the Audi driver quickly getting rid of Fulín.

On the ninth lap, Stefanovski was awarded a drive-through penalty for his incident with the championship leader, just as Kralev overtook Nagy for the lead. Fulín followed the Zengo Motorsport driver closely, but not quite enough to try a move on him.

Kralev won the race ahead of Nagy and Fulín. Schreiber managed to stay in the title fight despite a difficult race, finishing fourth ahead of team-mate Peter Rikli. Petr Fulín Jr. made a strong debut as he finished sixth ahead of Volkswagen’s Vaclav Nimc. Stefanovski scored a point, which will hand him a pole position start but also rules him out of contention for the title. SEAT’s Mladen Lalusic and Petr Cizek completed the top ten.

Fulín still leads the championship, but the fight remains wide open as his advantage over Nagy shrinks to three points. Schreiber also remains in contention, six points shy of the lead with ten still up for grabs.