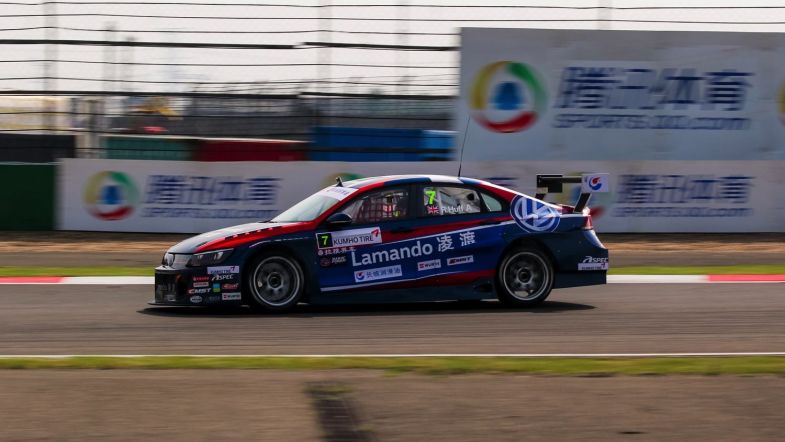 Rob Huff and Ma Qing Hua led the way for SAIC Volkswagen in qualifying for the first race at the Shanghai International Circuit, and will take up the front row for the race, giving the German manufacturer the best opportunity to reduce the gap to championship leaders Dongfeng Kia, who struggled in the session.

None of the front runners set a time during the first ten minutes of the session, which left Yang Fan, now in the privateer Star Team-run Mercedes after departing the SAIC Volkswagen team this weekend to make way for Ma Qing Hua, to lead the way.

His lap times were soon eclipsed, with Rob Huff going fastest of all in the #7 Lamando GTS with a time of 1:54.095, with BTCC regular Adam Morgan his closest threat in the BAIC Senova D50 at this point, just 16 thousandths of a second behind.

With just under ten minutes to go, Ma Qing Hua went fastest of all in the sister Volkswagen Lamando GTS, just under a tenth of a second quicker than Huff, but Huff responded with a time of 1:53.652 just before the chequered flag to ensure a SAIC Volkswagen 1-2 for this afternoon’s race.

Behind the two Volkswagens, Row 2 will be led by BAIC Senova’s Adam Morgan, with the leading Changan Ford Focus of Martin Cao fourth on the grid.

Juan Carlos Zhu’s BAIC Senova will start seventh, with Pepe Oriola eighth on his CTCC debut with Ford, with the Volkswagens of Zhang Zhen Dong and Rodolfo Avila completing the top ten.

Dongfeng Kia, which head in as the only team that can win the drivers’ championship, and with a 38.5 point lead in the manufacturers’ championship, had a tough session, with Alex Fontana the best-placed of their drivers in 11th, 1.3 seconds off the pace, with André Couto 12th, Jason Zhang 14th, and Leo Yi 15th.