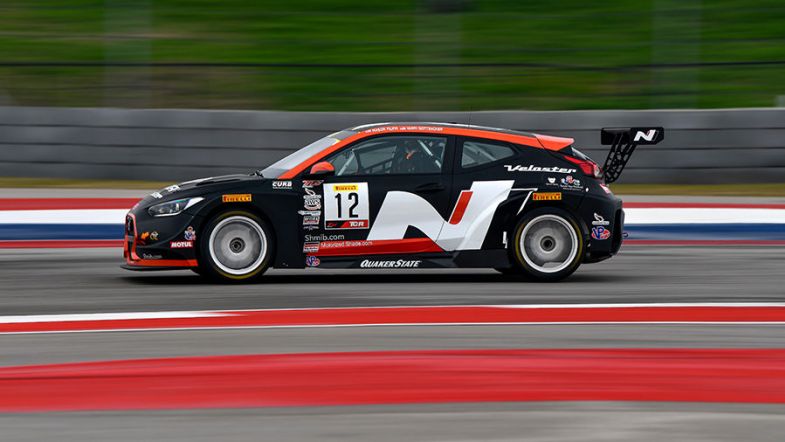 Mason Filippi produced a dominant performance on track to secure victory in the opening TC America race of the season at the Circuit of the Americas.

The Hyundai driver had qualified quickest but was then sent to the back of the TCR grid for a technical infringement, which put the Volkswagen Golf GTI TCR of Nate Vincent onto pole instead.

Vincent would be unable to take up his place at the head of the field however after slowing on the green flag lap, forcing officials to delay the start as he got his FCP Euro-run car back underway.

That meant that it was the sister VW of Michael Hurczyn – who had only posted the third quickest qualifying time – that instead led the field away when the race did get underway, defending into turn one to keep the Alfa Romeo of James Walker at bay before scampering away from the field behind.

That field was initially headed by Bryan Putt’s Audi after he sneaked past Walker exiting turn one, but it was Filippi’s Hyundai that was the car to watch; the TFB man slicing through the field to end lap one already up to second after getting ahead of Putt in the final part of the lap.

Lapping quicker than the leader, Filippi was soon on the tail of Hurczyn’s VW and the Veloster N TCR swept through into the lead mid-way through lap four. From there on, Filippi was untroubled at the head of the field and ultimately took the first win of the year by just under nine seconds – giving the Hyundai victory on its series debut in the process.

Having lost the lead, Hurczyn found himself left in a lonely second place, even after team-mate Vincent was able to work his way back through the field into third spot.

Although Vincent closed to within a second with a series of consistently quick laps, he didn’t have time to make a move for position and the team-mates rounded out the podium places.

Having led the TCR Cup class in the early stages, Putt missed out on class honours to fellow Audi racer Alain Lauziere, who bounced back from a tough qualifying session to take fourth, with Putt and Walker rounding out the top six.

Nelson Chan took seventh having lost time with a spin on the opening lap, with Christian Cole, Harry Cheung and Michael McCann completing the top ten.