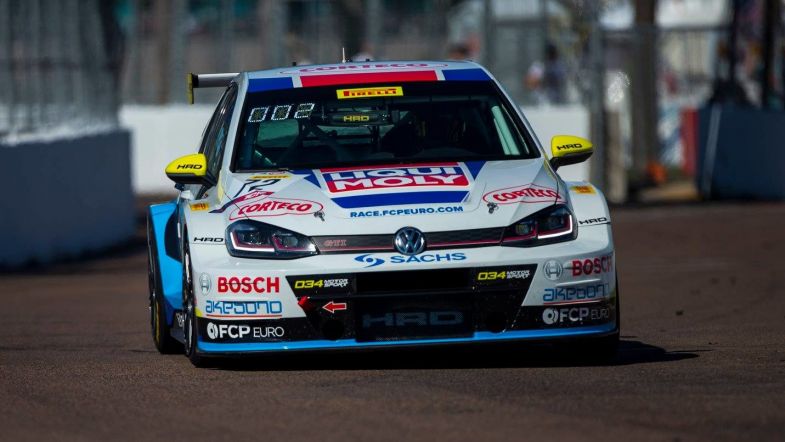 Nate Vincent converted pole position into victory in the second race of the weekend at the St. Petersburg street circuit, finishing ahead of his Heinlein Racing Development Volkswagen team-mate Michael Hurczyn, while the race was broken up at the end by a safety car following an incident for Risi Competizione’s James Walker.

Walker made a great start from third on the grid at the rolling start, and took his Alfa Romeo Giulietta TCR past yesterday’s race winner Michael Hurczyn in the #71 Volkswagen Golf GTI TCR, but Hurczyn was able to get back ahead of him at Turn 4 with a late braking manoeuvre on the same lap.

Running behind them was the top of the DSG class cars of Bryan Putt, in the Rowe Racing Audi RS 3 LMS DSG, with former Canadian Touring Car champion Alain Lauziere making up two places at the start in his Audi, though he soon slipped back down the order.

While the Audis battled with each other, the top three continued to pull away from the field, though unlike in yesterday’s race, the order was fairly stable between the top three, with Vincent holding on ahead of Hurczyn and Walker.

The safety car was deployed after James Walker’s race came to an end on lap 19, after he clipped the wall on inside of the kink after Turn 9 with his Giulietta TCR and spun back across the circuit and into the wall on the left, with the car taking significant front-end damage.

It took some time to recover the damaged Alfa Romeo, leading to just three laps of green flag racing at the end, with the two FCP Euro-backed Volkswagens restarting split by one of the TCA class Subaru BRZs.

Vincent went on to leap away from his team-mate and took the win by 1.7 seconds ahead of Hurczyn, with Bryan Putt completing the podium in his Audi.

Michael Hurczyn now leads the championship on 76 points, six clear of his team-mate Nate Vincent, with Mason Filippi staying on 50, who’s skipped the weekend to be ready for next week’s IMSA Challenge race weekend.

The next round of the TC America championship takes place at the Virginia International Raceway on 26-28 April.