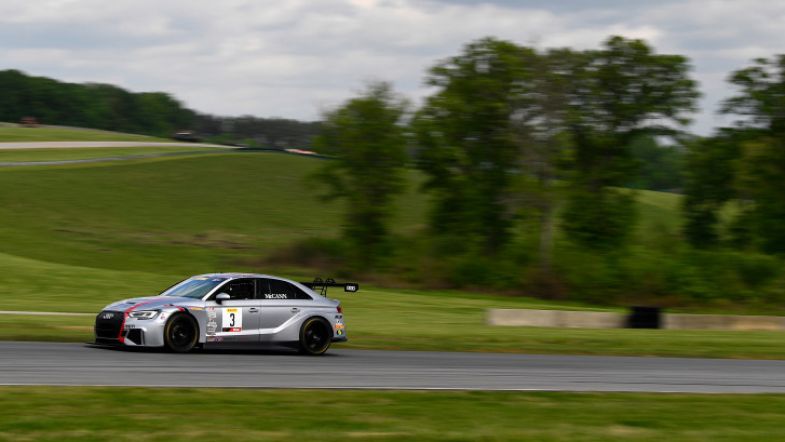 Michael McCann takes his first win of the season at Virginia

McCann Racing’s Michael McCann drove his Audi RS 3 LMS to victory at Virginia Internationa Raceway to score his first TC America series win of the season, in a race dominated by the cars from his team.

Nate Vincent’s race was over before the start, as the FCP Euro’s driver’s Volkswagen Golf GTI TCR was towed away during the formation lap due to a technical issue.

The rolling start saw McCann Racing’s Casey Jr, driving an Audi RS 3 LMS, making the most of his pole position to take the lead, closely followed by Michael Hurczyn of FCP Euro.

Bryan Putt of ROWE Racing spun off the track, falling to the back of the field during the opening lap. Michael McCann Jr, at the wheel of one of the Audi RS 3 LMS from his own team, settled in third, just ahead of series newcomer Victor González, driving the Honda Civic Type R TCR from VGMC Racing, who took advantage of the earlier mishaps to climb up to fourth place.

At the front, Casey Jr. continued defending from the attacks from Hurczyn, but the FCP Euro driver made a mistake and went off track. This forced him to come into the pits to remove grass that was blocking the air intakes, causing overheating in his Volkswagen Golf GTI TCR.

James Walker, at the wheel of the sole Alfa Romeo Giulietta TCR from Risi Competizione, came to the pits at the end of the tenth lap to make setup adjustments for tomorrow’s race. The American driver is racing this weekend with a plate on his collarbone after his incident in the St. Petersburg race.

McCann Racing driver Christian Cole, at the wheel of an Audi RS 3 LMS, overtook González for third on lap 15. Meanwhile at the front, McCann caught his leading team-mate, with Casey Jr. making way for his team boss two laps later.

McCann took the victory eight seconds ahead of Hurczyn who came charging from the back of the grid and overtook Casey Jr, González and Cole on the last lap to finish second ahead of Casey Jr.

González was fourth in his debut race, with Cole taking fifth position and Putt in sixth place. Walker completed the classification, a lap behind the leaders in seventh.