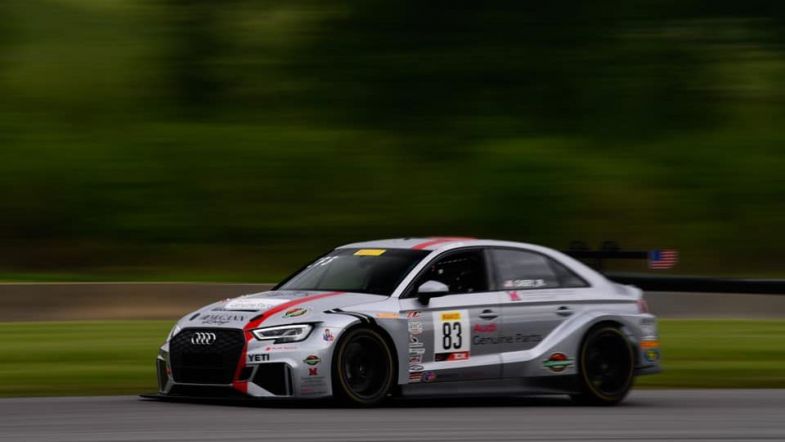 Britt Casey has won the final race of the weekend at the Virginia International Raceway for McCann Racing in his Audi RS 3 LMS, going from eighth on the grid to victory.

Michael Hurczyn started from pole position in the HRD Racing Volkswagen Golf GTI, while Victor Gonzalez quickly moved up to second in the sole Honda Civic TCR in the race, run by VGMC Racing, while Casey had to start from last after being excluded from yesterday’s race, where he had finished third.

On lap five, Casey had caught the battling pair of Gonzalez and Nate Vincent in the second HPD Volkswagen, and joined the rear of Vincent’s Golf as the two slipstreamed past Gonzalez’s Honda, before passing Vincent’s Volkswagen one turn later to grab second.

On lap eight, Michael McCann crashed out of the race as he ran his Audi into Bryan Putt’s ROWE Racing Audi, with McCann forced to pit for repairs, while Putt was able to continue.

On lap ten, Casey then took the lead after a brief fight with race leader Michael Hurczyn, making the switchback at Turn 4 on the Volkswagen driver.

From then on, Casey was untouchable, going on to win the race by four seconds ahead of Hurczyn, with team-mate Vincent completing the podium.

Hurczyn now extends his championship lead to 27 points over team-mate Vincent, heading to the next round of the championship at Sonoma Raceway on June 7th-9th.