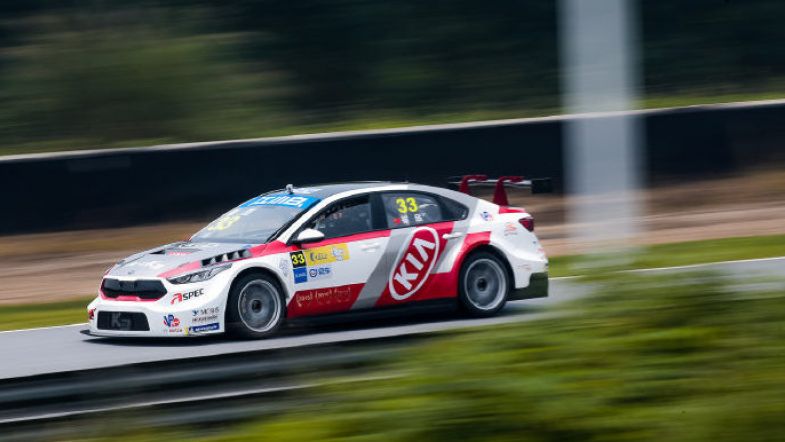 Cai Yue has won the second race of the 2019 China Touring Car Championship at the Guangdong International Circuit, the first for the new Kia K3 on its racing debut.

Yue started from pole position with the SAIC Volkswagen of Zhang Zhen Dong alongside, and led the way into Turn 1, but there was trouble as the BAIC Senova D50 of Adam Morgan was again the first casualty of the race, edged out wide at Turn 2 and into the tyre stack, bringing out the first safety car.

This time there were no dramas with the safety car, and the field were suspended as Morgan’s car was recovered.

The race resumed on lap five, briefly, as Rodolfo Avila in fourth set on Martin Cao’s Kia for third, but after Avila forced his way past at Turn 2, he was then encouraged off the track by Cao’s Kia at Turn 3, and found himself stranded in the gravel trap.

The safety car was called again, while Cao had to make a brief pit stop for some loose trim to be removed.

This promoted Alex Fontana to third in the next Kia, and the race restarted on lap eight.

The safety car was immediately called out again as Jason Zhang’s Kia stopped while running in tenth place with an engine issue, and he abandoned his car right on the circuit.

The race resumed on lap 11, and this time without incident, with green flag running until the finish, with Yue withstanding initial pressure from Zhang, before going on to win the race by 2.1 seconds, with the race shortened to 17 laps from the scheduled 20.

Fontana finished third, with Juan Carlos Zhu the only BAIC Senova driver to finish the race crossing the line in fourth.

Rainey He was again the best of the FRD-run Changan Fords in fifth, ahead of team-mate Andy Yan, with Cao recovering to seventh in his Kia.

Jim Ka To was eighth in his Changan Ford, with the Toyota Corolla of Zhang Han Biao and the SAIC Volkswagen of Han Han completing the top ten.

The next round of the 2019 CTCC takes place at the Shanghai International Circuit on June 1st-2nd.