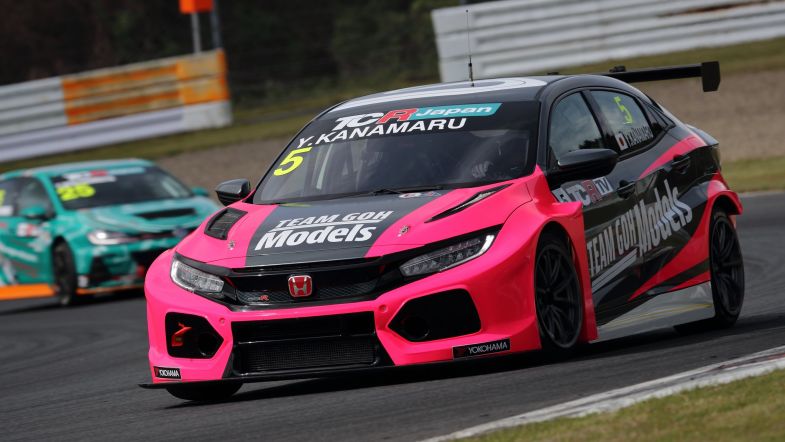 Yu Kanamaru won the second race of the opening round of the TCR Japan Touring Car Series at the Autopolis circuit, leading a Honda 1-2 with yesterday’s race winner Matt Howson finishing behind him.

Takuro Shinohara had qualified on pole position in his Hitotsuyama Racing Audi RS 3 LMS by just under a tenth of a second, outqualifying yesterday’s race winner and pole-sitter Matt Howson, running in the KCMG Honda Civic TCR.

At the start of the race, Shinohara got away well, while Yu Kanamaru made a strong start from third on the grid in his Team Goh Models Honda Civic TCR to head down the middle of both Shinohara and Howson into Turn 1, but Shinohara had the inside line and was able to keep the lead.

Meanwhile, the second KCMG Honda of Yukinori Taniguchi had made up two positions at the start, and then soon passed Resshu Shioya’s Honda to move up to fourth on the opening lap.

On lap two, race leader Shinohara suddenly slowed and headed for the pits, promoting Kanamaru to the lead with Howson second and Taniguchi third.

A mistake by Taniguchi a lap later saw him go off wide and drop three places, with Takeshi Yatsumoto’s RT Team Wakayama Volkswagen now up to third.

Taniguchi would lose another spot when he was passed by Hirobon in the Birth Racing Project Volkswagen, with Hirobon quickly pulling away and catching up to the lead pack.

As the race drew on, Kanamaru slowly broke away, while in the final five minutes there was a five-car scrap for second, led by Howson’s Honda.

Howson was being hounded at every turn by Matsumoto’s Golf GTI TCR, but the Volkswagen was unable to find a way past, also under pressure from behind from Shogo Mitsyama’s Green Brave Volkswagen.

Kanamaru would win the race by three seconds ahead of Howson and Matsumoto, with Mitsyama fourth ahead of Shioya’s Honda and Hirobon’s Volkswagen.

The next round of the series takes place at Sportsland Sugo on June 22nd-23rd.