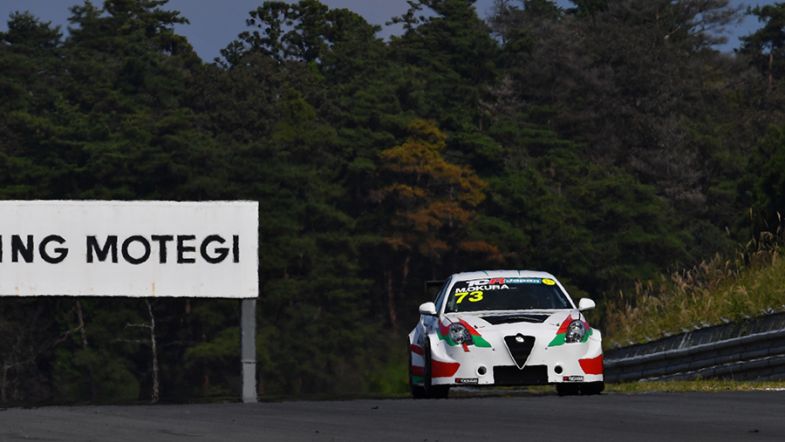 Mineki Okura took a comfortable victory in the opening TCR Japan race of the weekend at Twin Ring Motegi.

As the series resumed after a break of almost two months, Okura stormed to a maiden win at the wheel of his Alfa Romeo Giulietta Veloce in a race that – as expected – saw the Saturday title fight decided with a round still to run.

Having qualified on pole, Okura made the best start to hold the lead from Resshu Shioya and champion-elect Hirobon, with series newcomer Anna Inotsume and Masanobu Kato – the driver hoping to catch Hirobon – giving chase.

On lap three, Kato went to the inside of Inotsume in a bid to get ahead only for the pair to clash, and Inotsume‘s Honda suffered a spin before she was able to rejoin at the back of the field.

Up front, Okura had built a healthy lead of several seconds, while Kato closed in on Shioya and Hirobon.

When Hirobon tried to pass Shioya for second, contact allowed Kato to nip ahead of the pair into second spot, with Hirobon holding third and Shiyo the one to lose out as he dropped to fourth.

There were no further changes in the top positions as Okura took the chequered flag well ahead of Kato and Hirobon, while Shioya beat Jun Sato and Masayoshi Oyama to finish fourth.

With a lead of 42 points over Kato, and only 30 available at Suzuka, Hirobon has now wrapped up the Saturday title and the Cupra driver could secure the Sunday crown in race two if results go in his favour.