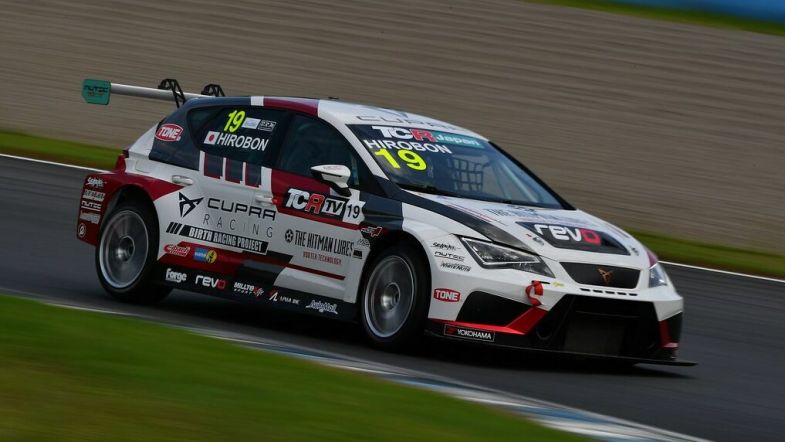 For Hirobon, his lights-to-flag win in the opening race of the weekend was his third Saturday Series triumph of the win, enabling the Cupra driver to extend his margin at the top of the standings to 44 points.

Come Sunday, Fuji came out on top in a drama-filled nine-lap encounter to claim his maiden race win, as Hirobon languished down in seventh by the end.

After topping Friday’s second practice session around the 2.98-mile circuit, Hirobon then dominated qualifying to take pole position by over nearly a second from Yuseke Shiotsu’s Honda Civic Type-R TCR for the Saturday Series race.

Both Hirobon and Shiotsu got off the line evenly, with Hirobon cutting across the Honda of Shiotsu vigorously as the pair headed into Turn 1 for the first time. Third-placed starter Yuki Fuji also got a good getaway and attempted to go around the outside for the lead before slotting in behind the leading duo.

Shiotsu, having briefly taking the lead on the inside of Turn 1, then went side-by-side with Hirobon on the run towards the second corner, with Hirbon using the inside line under braking to keep his Cupra ahead.

Fuji settled into third after staving off the attentions of Masanobu Kato’s Audi RS 3 LMS at Turn 3, while Masayoshi Oyama leapt from seventh on the grid to hold fifth early on.

Shiotsu shaddowed Hirobon for much of the opening stanza, as the pair began to open a margin over third-place Fuji, who in turn had a safe advantage over Kato’s Audi.

Kato himself, soon had Mineki Okura’s Alfa Romeo for comfort as the race entered the final 11 minutes, with Okura eventually getting by around the outside of Turn 2.

The move was, in all reality, set up after a mistake from Kato under braking for Turn 1, with the Audi running fractionally too deep, which allowed Okura to take the inside line on exit, and with it better drive.

Okura’s pace in the latter stages of the race really started to show as he caught and passed Fuji for third, as Hirobon extended his margin over Shiotsu.

That margin was never seriously troubled out front, as Hirobon ballooned his Saturday Series lead to 44 points over Kato with his third win of the season, by just over three second at the flag.

Okura completed the drive of the race in third, with Fuji clinging onto fourth ahead of Kato.

Shiotsu started Race 2 from pole position but his lead didn’t last long at all, as fell front-row starter Fuji catapulted off the line to aggressively grab the lead on the run to the first turn.

The Audi barged past the Honda, making contact before the braking zone to seize the advantage.

Further back, there was drama for Hirobon – who had been forced to start at the back of the grid following a track limits violation which removed his best qualifying effort.

The Cupra had made a decent start and looked to go around the outside of Turn 1, but was hit by the Alfa Romeo of Okura, who had been tagged by Masayoshi Oyama’s Honda.

The resulting contact sent Hirbon spinning into the gravel, before being hit again by Mototino’s Honda. Okura then had contact with Kenji Suzuki further round the opening lap, causing extensive damage to both cars, while Shiotsu spun out of second place.

Naturally, the safety car was deployed to clear up the pair of accident scenes, the race resuming with six minutes left.

Fuji led the way initially from Oyama, with Shiotsu down in fifth, but the latter recovered to second before the end, getting to within half a second of the race winner.

Oyama completed the podium in third, while Hirobon’s difficult race ended with the Cupra seventh and a lap down.

The next race for TCR Japan will again be at Motegi, on the weekend of the 16-17th October.