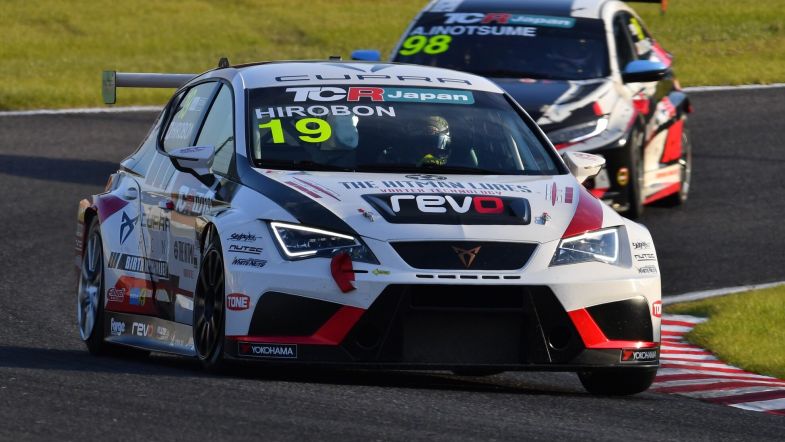 Birth Racing Project’s Hirobon wrapped up the TCR Japan Sunday Series title in style by taking victory in the final race of the season at Suzuka.

The Cupra driver, who already claimed the Saturday Series crown at the previous round at Motegi, led from start to finish to head Masanobu Kato to the line by just under nine seconds.

Race 1 winner Resshu Shioya ended the season on the podium in the second 20-minute encounter in third.

With the Saturday Series title already secured, Hirobon had very little else to prove in the opening race, but still took pole position from the DOME Racing Honda Civic Type-R TCR of Anna Inotsume.

Inotsume got a better initial getaway from second on the grid to move alongside Hirobon on the run towards Turn 1, but Hirobo steamed around the outside of the corner to take his Cupra into an early lead.

Unfortunately for the Cupra driver, he had jumped the start and was handed a drive through penalty of the seventh lap of ten, giving Inotsume the lead from Shioya.

Inotsume impressively held a slender advantage until the final lap, a mistake a the fast Degner right-hander sent the Honda briefly through the gravel trap before getting back on track.

Shioya needed no second opportunity and swept into the lead, denying Inotsume a maiden win within sight of the flag.

Inotsume did hang on to claim second, however, comfortably ahead of Team Mars’ Kato, while 55 Moto Racing Honda’s Mototino and the Alfa Romeo of Mineki Okura were close behind, with Hirobon finishing sixth.

Race 2 on Sunday began in damp conditions, with Hirobon getting away from pole position safely into the first corner, with Kato following behind.

The big mover on the opening lap was Shioya, who past Inotsume off the line before sliding ahead of Okura as the Alfa struggled for grip at the start of the Esses.

Shioya then perfected a superb move around the outside of Kato’s Audi to take second, using the far superior grip levels at the end of the Esses.

By this point, Hirobon had largely checked out, building a mammoth 5.3s lead by lap two over Kato who managed to get around the outside of Shioya under braking for the final chicane.

The track had been drying out since the start, and Kato began to reduce the deficit to Hirobon, but the latter’s impressive start was too much for Kato to do anything about it and trailed the Cupra by 8.835s at the finish.

Shioya completed the podium, ahead of Inotsume, who passed Masayoshi Oyama for fourth on the third lap of 10. Okura was fifth ahead of Kenji Suzuki’s Audi, with Mototino also getting past Oyama before the flag.