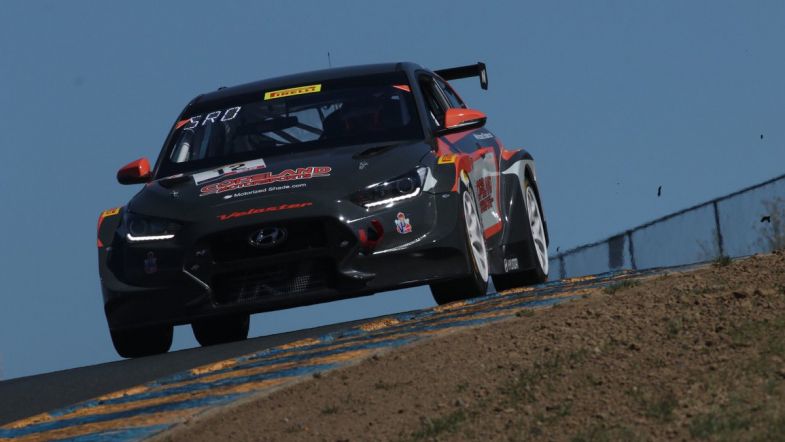 Mason Filippi bounced back from the disappointment of the opening race to secure his third win of the TC America season in the second race of the weekend at Sonoma Raceway.

On his debut weekend with the Copeland Motorsports team, Filippi had seen his chances of victory in race one ended by contact with a back-marker that damaged his Hyundai Veloster N TCR and saw ultimately played a part in him ending up down in fifth place as Victor González took a surprise win.

As had been the case on Saturday, Filippi started from pole for the second 40 minute long race and made the ideal getaway from the rolling start to lead the field into turn one, with points leader Michael Hurczyn getting the jump on team-mate Nate Vincent to move into second and race one winner González sneaking ahead of Harry Cheung into fourth.

Before Filippi was able to try and break away at the front however, the race went under caution after the Honda Civic of Stephen Jeu ground to a halt on track after heavy contact with the barriers, with the race eventually resuming on lap five once the TCA-spec car had been removed from the circuit.

Filippi immediately set about building a lead when the safety car peeled into the pits and quickly established a gap to the two FCP Euro Volkswagens behind, with González trying his best to keep pace with the leading three runners.

However, just a single racing lap would be possible before another full course caution was thrown thanks to dramas amongst the TCA field, with Robert Crocker’s Subaru left stranded on the outside of the final hairpin after he went straight off into the tyres.

Behind the safety car, Cheung would suddenly slip to the back of the field before then retaking his position; a move which would earn him a 30 second stop/go penalty and drop him well down the order.

The race got back underway with little more than 17 minutes remaining on the clock at the start of the tenth lap, with Filippi once again controlling the restart to perfection to get the jump on Hurczyn.

As Filippi finally started to make the most of the pace in his Hyundai to pull away at the front, Hurczyn found himself coming under pressure from team-mate Vincent and Honda racer González, with the trio almost three abreast going into the start of the twelfth lap.

González would have a look on the outside going into the hairpin at the end of the lap but couldn’t make a move stick, and then tried the inside line at the same corner at the end of lap 13 only for Vincent to fight back through the left-hander leading up to the line.

That battle was easing the pressure on Hurczyn ahead in second, although the championship leader was unable to make any inroads into the gap Filippi had established out front.

The squabble for third was also working in favour of fifth placed James Walker, who was now lapping quicker than anyone else on track in the Risi Competizione Alfa Romeo, and was reeling in the podium battle ahead.

The pressure on Vincent saw him run wide and brush the wall and at the end of lap 16, González was finally able to make a move stick – nosing the Honda down the inside under braking into the hairpin to go third.

Two laps later, González was up into second, catching Hurczyn by surprise at the chicane with a move that forced the Volkswagen to go off across the grass; the loss of momentum giving Vincent a run going into the hairpin as he tried to take third. Hurczyn however was able to make use of a TCA back-marker to ensure he reclaimed the place going into the final lap.

Out front, Filippi was unchallenged as he secured his third victory of the season and the first for the Copeland Motorsports team, with González capping a fine weekend as he added a second place finish to his race one win.

Hurczyn rounded out the podium to retain his championship lead over team-mate Vincent, who managed to fend off Walker’s fast-finishing Alfa Romeo to take fourth.

As had been the case in race one, Bryan Putt was best placed of the TCR Cup entrants in sixth place overall, ending the race comfortably clear of Stephen Vajda and Christian Cole, with Cheung again rounding out the nine car field as a result of his penalty.

Rounds 9 and 10 of the season take place at Portland International Raceway next month.