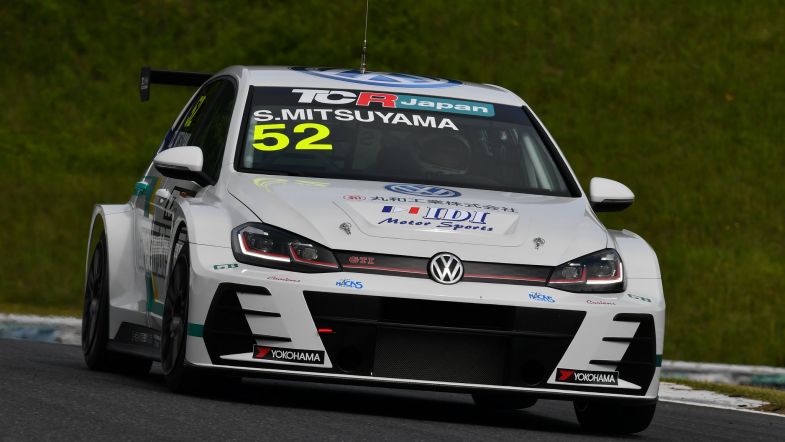 Shogo Mitsuyama of team Green Brave won the first race of the weekend at Sugo Sportsland after a strong start from third on the grid.

Pole sitter Takuro Shinohara made a poor start and dropped to fourth position by turn one while Alfa Romeo driver Shuji Maejima made the best start to claim the lead.

But the lead only lasted into turn one as the Go&Fun Squadra Corse driver lost the rear end and spun off into the gravel, dropping to the last position.

And Maejima’s problems with rear grip continued as he spun off at the same corner on lap three. The Alfa Romeo driver kept fighting though and was able to fight back up through the field to finish seventh.

Shinohara was on a charge to make up for his poor start, passing KCMG driver and championship leader Matthew Howson on the outside of Turn 1 on the second lap to claim second position.

The Audi RS 3 LMS driver then gained on race leader Mitsuyama but was never able to get close enough to the Volkswagen driver to launch an overtaking attempt and had to settle for second position.

There was drama on the penultimate lap as Team Goh Models driver Yu Kanamaru tried to pass Howson for third place. Kanamaru seemed to brake too late and took evasive action onto the grass to avoid the British driver and spun off into the gravel.

Volkswagen driver Jun Sato also went off into the gravel on the penultimate lap in a separate incident.

Mitsuyama won the race seven tenths of a second ahead of Shinohara. Howson finished a distant third, eleven seconds behind, with Takeshi Matsumoto of RT – Team Wakayama finishing fourth.

The second race of the weekend starts at 09:35 CEST tomorrow.