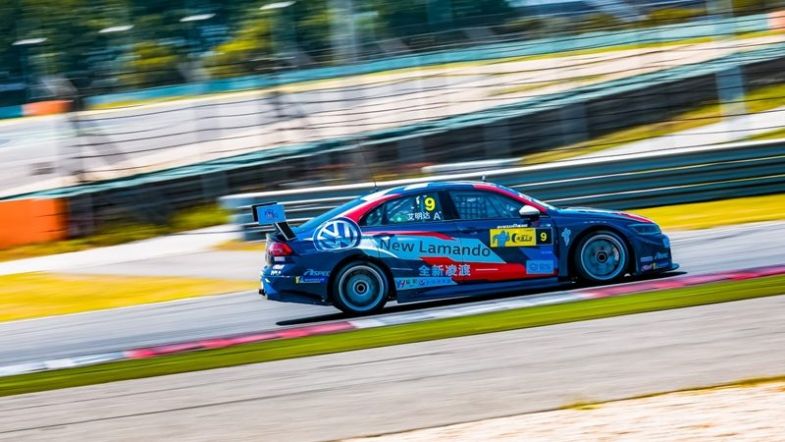 Wang Rue wins the second race at Zhejiang for Volkswagen

SAIC Volkswagen 333 Racing driver Wang Rue has won the second race of the weekend at Zhejiang, finishing ahead of the two BAIC Senovas of Juan Carlos Zhu and Adam Morgan.

Rodolfo Avila (pictured) started from pole position in his Volkswagen Lamando GTS and led the way, while Adam Morgan was quickly up to second in his Senova ahead of Juan Carlos Zhu’s Senova.

The Senovas soon shuffled around with the three cars line astern behind Avila, with David Zhu emerging ahead of his brother, and the third D50 of Adam Morgan.

Behind, Zhang Zhen Dong was running in fourth in his Volkswagen ahead of Martin Cao’s Kia, but the former champion ran wide at Turn 1 on lap three and dropped back, allowing Martin Cao to challenge the Senovas, and soon passed Juan Carlos Zhu’s Senova for third, with Avila and David Zhu up ahead.

Zhu and Avila soon made contact, with Avila dropping to 11th, with Zhu taking the lead.

One lap later, Wang Rue, now the leading Volkswagen, charged past both Morgan and Juan Carlos Zhu’s Senovas for second, but David Zhu was safely out ahead, but a few laps later the Senova driver was given a drive-through penalty which dropped him to the back of the pack.

David Zhu managed to finish the race in eighth ahead of Zhang Da Sheng’s Kia, with Rodolfo Avila completing the top ten.

Martin Cao failed the finish the race, but the Kia driver had been rewarded with a victory overnight following a post-race penalty for overtaking under yellow flags for Adam Morgan.

The next round of the championship takes place with the World Touring Car Cup at Ningbo on September 15th.