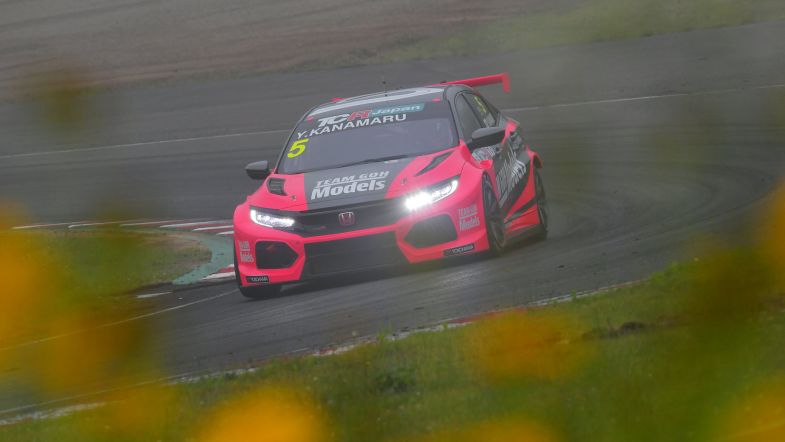 Yu Kanamaru won a thrilling first TCR Japan series race of the weekend at Fuji Speedway from the back of the grid. The Team Goh Models driver won the race, which was held in wet conditions, by a massive nine seconds, despite snatching the lead on lap seven of 12.

Takuro Shinohara started the race from pole position but quickly fell down the order and crossed the finishing line in ninth position behind the wheel of his Audi RS 3 LMS.

Instead it was Volkswagen driver Takeshi Matsumoto who claimed the lead in the first part of the race from fifth position on the grid.

There was a furious fight for the positions behind Matsumoto, primarily between Alfa Romeo driver Shuji Maejima, Volkswagen drivers Hirobon and Shogo Mitsuyama.

British driver Matthew Howson was involved in the top fight initially but was unable to keep in touch with the top and crossed the line in sixth position, 23 seconds from winning driver Kanamaru.

Kanamaru started on the last row of the grid due to an engine change but quickly sliced his way up through the field and claimed the lead on lap seven.

Maejima of team Go&Fun Squadra Corse provided a thrilling show trying to claw back positions after making a mistake in the beginning of the race. The Alfa Romeo driver utilised the superior top speed on the long main straight and fought hard to claim the final podium position behind Matsumoto after passing Hirobon in the final corner of the last lap.

Yuke Taniguchi finished seventh behind the wheel of his Honda Civic TCR with Hong Kong driver Paul Ip rounding off the top eight.

The second race of the weekend starts tomorrow at 04:55 CEST.