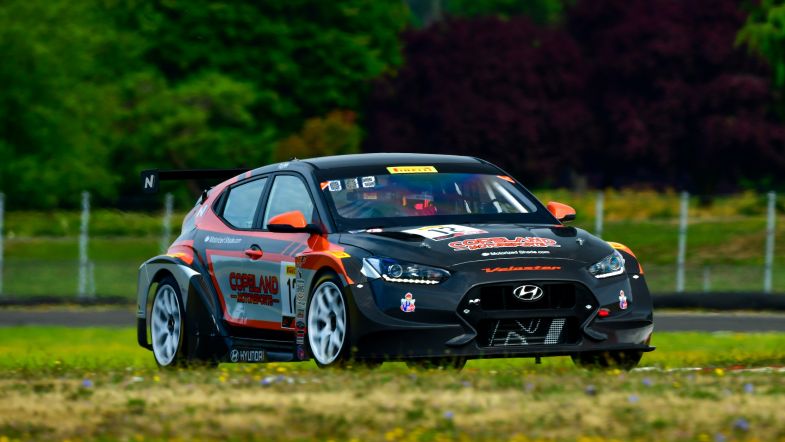 Mason Filippi maintained his strong run of form in TC America with victory in the opening race of the weekend in Portland.

Having edged pole by just 0.050s in qualifying, Filippi made the ideal start when the lights went out to lead the field into turn one, with Nate Vincent holding off the fast-starting Alfa Romeo of James Walker to maintain second spot.

Walker’s bid to take second would actually see him lose a spot instead, with a loss of momentum out of the corner allowing championship leader Michael Hurczyn through into third.

As had been the case in the previous meeting at Sonoma, Filippi immediately set about trying to build an advantage at the front in his Hyundai Veloster but he would prove to be unable to shake off the Volkswagen behind, with Vincent staying firmly within striking distance.

Close behind, Hurczyn was lucky to avoid a lurid slide on lap four that dropped him back from the two leaders, and left him to come under pressure from Walker – who had got himself up to speed at the wheel of the Alfa Romeo.

The first lap under 1:20 from Filippi on lap six saw him finally gain some breathing space over Vincent in what was rapidly becoming a two-way fight for the win.

That was because Hurczyn in the second of the Volkswagens was being forced to drive with his eyes firmly on the mirrors as Walker tried to find a way through, with the Audi of Michael McCann Jr closing in to make it a three-way fight for the final step on the podium.

Although Filippi had been able to get his lead up to nearly a second and a half, it soon started to come back down as the leaders started to make their way through the back-markers in the TCA class – with Vincent closing onto the rear of the leader.

At the start of lap ten however, Vincent was held up behind a back-marker, which allowed Filippi to once again open up a slender advantage over his rival.

Further back, McCann had slipped away from the podium battle, and then lost fifth to Victor Gonzalez when the Honda driver took advantage of the traffic to take fifth on lap 13 – with the Sonoma race winner immediately starting to edge away from the Audi.

As the race passed the half way stage, Filippi continued to hold a lead of just under half a second over Vincent when the Safety Car was deployed to allow the stricken Mazda of TCA runner Jose Dasilva to be recovered from the side of the circuit at the exit of the opening chicane.

The action resumed with a little over eleven minutes still left on the clock, with Vincent taking a look around the outside of Filippi into turn one only for the Hyundai man to hold onto his place at the front.

Lap after lap, Vincent would close in through the opening chicane only for Filippi to then eek out his lead again through the remainder of the lap, with the pair consistently lapping within a tenth of each other – with the battling duo also aware that Hurczyn and Walker were ready to pounce in the event of any mistakes.

However, with little more than 90 seconds of the race remaining, the Alfa Romeo would suddenly slow, with Walker pulling off to the side of the circuit to retire.

With the leaders once again in traffic as the final lap kicked off, Filippi was able to hold on to secure his fourth victory of the season with Vincent being left to settle for second ahead of points leader Hurczyn.

Walker’s late retirement meant Gonzalez ended up fourth in the lone Honda Civic Type R, with McCann Jr closing in on the final lap but ultimately being forced to settle for fifth.

Sixth spot for Bryan Putt saw him secure honours in TCR Cup ahead of Stephen Vajda, with Christian Cole rounding out the eight finishers.

Cole had looked set to be Putt’s closest rival for class honours but would be too eager to make his move for position after the caution period and edged ahead of Putt before the control line – an error that would result in him being given a drive through penalty.

Hurczyn is on top of the standings with 160 points, Vincent is second on 127 and Filippi third on 110 points.