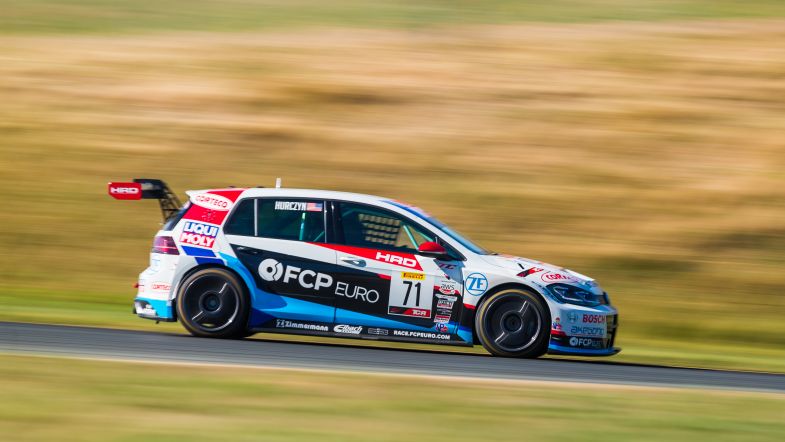 Michael Hurczyn has extended his lead in the TC America standings after securing victory in the second race of the weekend in Portland.

After a relatively straight-forward opening race to the weekend on Saturday, race two would prove to be a much more chaotic affair, with plenty of action across the limited laps that were completed as a result of a mid-race stoppage.

An additional safety car lap after one of the TCA class Subarus expired on the green flag lap meant the clock had already ticked off two of the 40 minutes when the action got underway for the first time.

Pole man Hurczyn was able to keep the lead from Nate Vincent, with race one winner Mason Filippi slotting in behind the two Volkswagens despite his best efforts to try and get ahead into turn one.

Further back, Michael McCann Jr got the jump on the Alfa Romeo of James Walker, with the other big mover being Victor Gonzalez as he got up into seventh having dropped to the back of the grid thanks to a five place grid penalty.

By the end of lap two, the top three were already starting to break away from McCann Jr, with Hurczyn seeking to try and build a lead as Vincent did his best to keep Filippi’s Hyundai at bay.

The pair were almost level starting lap three and whilst Vincent was able to keep ahead, the battle allowed McCann Jr to bring himself back into contention.

The fight for second wasn’t enough to allow Hurczyn to break away however, with the points leader being reeled in to create a four-way fight for the race lead.

With traffic about to become an issue as the leaders closed in on the backmarkers, the race went under caution after the TCA Subaru of Robert Crocker went off heavily into the tyres on the exit of the opening chicane.

The field continued to circulate behind the safety car as the clock ticked down past the half-way stage, before the red flag was thrown to allow the damaged barriers to be repaired.

The cars would return to the pits before the race resumed after a stoppage of more than 15 minutes – and with the clock reset to make it a ten minute long dash to the flag.

Even then, there was confusion at the restart when the safety car peeled into the pits but there was no green flag shown – meaning that there was little more than five minutes to go when the action was finally able to restart.

Hurczyn was able to keep his place at the head of the field from Vincent as Filippi came under pressure from McCann Jr – who had crossed the line ahead of the Hyundai but couldn’t make a move stick into turn one, down in part to the fact that the Audi driver was also forced to defend from Walker’s Alfa Romeo.

The first full racing lap saw Hurczyn set the fastest lap to edge away from Vincent and the points leader extended his advantage through the final tour to beat his team-mate to the line by just under a second.

Filippi meanwhile was able to see off a charging McCann Jr on the run to the line to secure third, with the latter having taken nearly a second out of the trio ahead on the final lap.

Walker and Gonzalez took fifth and sixth places with Bryan Putt completing a double win in the TCR Cup class in seventh overall, ahead of Christian Cole and Stephen Vajda.

Hurczyn’s second win of the season – and his tenth straight podium – means he now leads Vincent by 44 points ahead of the next round of the season at Watkins Glen at the end of August.