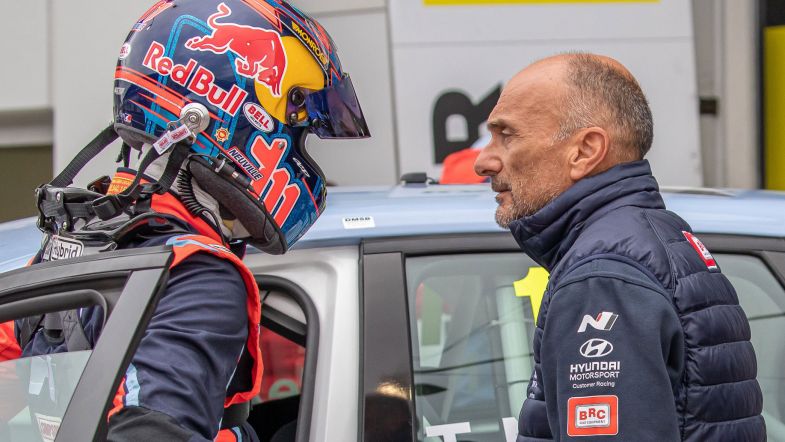 TCR Germany championship rookie sensation and Nürburgring Race 1 winner Thierry Neuville has confirmed talks with Hyundai regarding possible entries into the World Touring Car Cup (WTCR) in the future, while reigning WTCR champion Gabriele Tarquini says he would welcome the Belgian rally star to the series.

World Rally Championship frontrunner Neuville is creating headlines this weekend as he conducts his circuit racing debut (barring a preparatory outing in the Spa 25 Hours Fun Cup), driving Hyundai’s VIP car which is being raced by a raft of high-profile names throughout the TCR Germany season.

After scoring a storming lights-to-flag victory on his debut at the Nürburgring on Saturday, Neuville confirmed to TouringCarTimes that discussions had taken place regarding a return to racing in the future providing his schedule permits – pointing to the top-level WTCR series as a potential destination.

Hyundai (for whom Neuville is competing in WRC) is well-represented in WTCR, which replaced the previous World Touring Car Championship ahead of last season, with Norbert Michelisz currently the marque’s best-placed driver in the standings in second position.

“I mean, why not?” Neuville replied when asked if he was keen to do more racing. “We actually talked about it yesterday at dinner. For sure there are opportunities with Hyundai to do what I did here, a VIP start in some of the WTCR events. It has to match with my calendar and this year there’s no time anymore – I’m going to be very busy until the end of the year – but maybe next year there could be an opportunity.”

Neuville added that a WTCR outing, however, would require another level of commitment.

“If you go up against the fastest in the world in this type of car it definitely needs much more preparation and investigation also in the tracks and the different conditions you can face,” Neuville said. “It needs to be a couple of days [of] testing, and then you will be away for the whole race weekend like here, so it takes quickly more than a week to prepare. In a world championship like that, you want to be much better prepared than I was this weekend.

“Here, I know for example that I struggled since the beginning of the week to be fast in Sector 3. I am fast in Sector 1 and Sector 2 mainly all the time, but always losing a tenth or two in Sector 3. These guys [in WTCR] will be fast in every sector so in the end if you want to fight against the best you need more time to optimise your driving.”

Meanwhile, reigning WTCR champion and fellow Hyundai driver Gabriele Tarquini – who is on site at the Nürburgring this weekend to advise Neuville – has backed the Belgian to be in the mix also on the world stage.

Tarquini, who currently sits tenth in the 2019 WTCR standings following a more troubled start to this year’s campaign, says Neuville has been “almost perfect” in his adaptation to the TCR Hyundai.

“To be honest, I was really surprised about the performance of Thierry,” Tarquini said. “OK, he did some tests, some laps before to try the car, but starting almost from zero is not easy. He was probably not on the pace in the wet because he’s struggling a little bit there, but as soon as the track was dry he was very good.

“I’ve been watching his data all weekend and braking points, turning, steering angle, acceleration out of the corners – it was almost perfect. His pace was fantastic in qualifying and he was very clever in the race. The standing start was one of the best in the field and he perfected the safety car restart, something he has never ever done before. He did what an experienced driver would do.”

When asked if he would enjoy racing Neuville in the WTCR some day, the Italian touring car legend replied:

“Yes, why not? I mean, we also have these guest stars in some rounds. I don’t know if he wants to join but it would be very good for the championship to have a champion like him. And also for media activities it would be very good. I was speaking to Andrea Adamo (Hyundai motorsport boss) and I think the next three races of WTCR all clash with WRC, so probably only the last one is free because Malaysia is very late in the year. If he wants to come and there is the chance, then why not?”