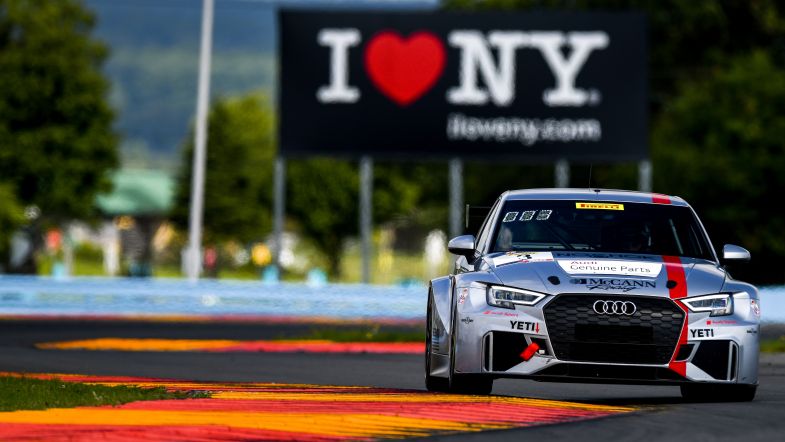 Michael McCann Jr produced an impressive drive in the opening TC America race of the weekend at Watkins Glen to secure his second victory of the 2019 season.

Having qualified on pole, McCann Jr led the field into turn one as fellow front-row starter Mason Filipppi was forced to defend from a fast-starting James Walker, who tried to nose his Alfa Romeo down the inside.

Walker was unable to make the move stick and lost momentum on the exit of the corner, which allowed FCP Euro team-mates Michael Hurczyn and Nate Vincent to slip ahead, with Walker then dropping back to sixth behind Victor Gonzalez’s Honda when he was forced to back off the throttle when Vincent had a moment at the Inner Loop.

Before the opening lap was at an end, Filippi was able to find a way ahead of McCann Jr into the lead, just before the race went under caution after Nick Wittmer’s TCA class Subaru slammed into the barriers on the exit of the Inner Loop.

As Wittmer’s car was removed from the circuit, track workers battled to complete repairs to the guardrail in double quick time, ensuring that the race was able to resume on lap six with just over 22 minutes remaining on the clock.

Filippi was able to control the restart to perfection as McCann Jr was forced to defend from Hurczyn into turn one, with the points leader then nosing his VW up the inside without success at the Outer Loop.

That allowed Filippi to build a slender lead, but his half-second advantage would soon be eroded as McCann Jr produced a storming first sector to close in and draft past the Hyundai on the back straight.

Filippi tried to fight back through turns six and seven, but McCann Jr was able to hold on and then set about pulling away as Filippi came under pressure from Hurzczyn behind.

The points leader was able to get ahead at the Inner Loop on lap eight but Filippi fought back by sticking around the outside through turn five, which gave him the inside line into turn six to reclaim the position.

That battle meant McCann Jr suddenly found himself more than two seconds clear, with Filippi becoming something of the cork in the bottle in the battle for second – with his car struggling for pace through the opening sector and leaving him vulnerable to attack from a train of cars behind.

Setting the fastest lap of the race, Vincent managed to pass team-mate Hurczyn towards the end of lap nine and then made light work of Filippi at the start of lap ten to move up into second spot, but faced a challenge to chase down the rapid Audi ahead.

In fact, McCann was able to extend his advantage to more than five seconds with the fastest lap on lap twelve, with Vincent coming under pressure from Hurczyn after he managed to get ahead of Filippi to put himself back into a podium position.

As McCann Jr started to work his way through traffic, the lead would start to come down however, and Vincent and Hurczyn were able to take three seconds out of the Audi on lap 14 to bring the gap down to little more than a second and a half.

Coming up to the TCA class lead battle at the end of the following lap, McCann lost further time but was then able to quickly clear the TCA MINI of Mark Pombo on the exit of turn one.

Vincent and Hurczyn came up behind Pombo coming through turn four and went either side of the MINI, with Hurczyn slipping through into second – only to then lose the place again at turn eight when Vincent went up the inside to reclaim second.

That dice between the Volkswagen duo meant McCann Jr gained extra breathing space, and he duly took the flag to secure his second victory of the season – and first since stepping up from TCR Cup after an accident at Sonoma severely damaged the car he had started the year in.

Vincent secured second ahead of Hurczyn, although the points leader was still able to maintain his impressive record of finishing on the podium in every race so far this season.

Filippi would have to settle for fourth place, with the Copeland Motorsports man helped by the fact that fifth-placed Gonzalez was under ever-increasing amounts of pressure from Walker in the closing stages.

The Mexican racer would ultimately hold on to fifth, with Walker less than two-tenths of a second behind at the finish.

In the TCR Cup class, Brian Putt saw his winning run come to an end as he failed to secure victory for a fifth successive race in his ROWE Racing Audi.

Putt had started from class pole and led the opening eleven laps before losing the lead to debutant Travis Hill, who had qualified third in class for the returning TWOth Autosports team.

As Putt then slipped back down the order, Hill was able to take victory by three seconds ahead of Stephen Vadja, with Christian Cole coming through to third after the red flag in qualifying left him out of position on the grid.

Putt would end up fourth in class, making the first time this season that he failed to make the TCR Cup podium, with the field rounded out by the returning Eddie Killeen – who had started from the back of the grid after failing to set a time in qualifying.

Race two of the weekend takes place on Sunday at 10:50 local time.