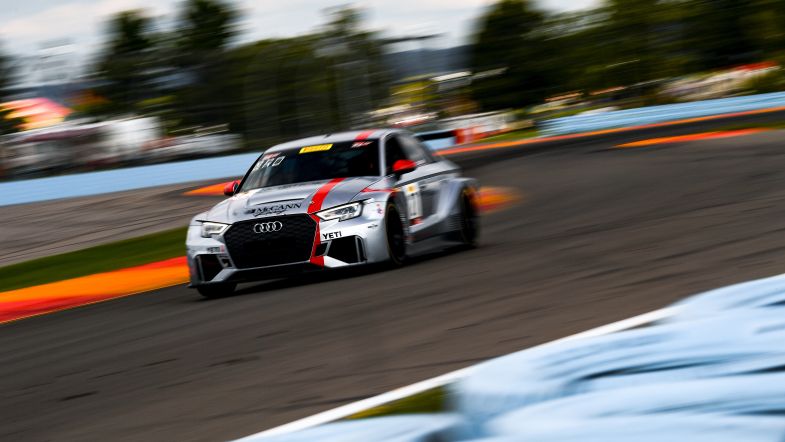 Michael McCann Jr will start from pole position for the opening race of the weekend at Watkins Glen after topping the times in qualifying for the latest rounds of the TC America season.

Having topped the times in Friday’s second practice session, it was Mason Filippi who set the pace on the first timed runs in the 15 minute long session, setting what was then the fastest lap of the weekend to date in his Copeland Motorsports-run Hyundai.

That put the four-time race winner comfortably clear of the Honda of Victor Gonzalez, with championship leader Michael Hurczyn more than a second behind in third.

As the majority of the field then started setting green sector times to improve on their second timed laps, it was the Audi of McCann Jr that vaulted to the top of the times as he looked to replicate his pace-setting performance during the two Friday sessions.

A time of 1:57.134 put him more than six-tenths of a second clear of Filippi who was unable to respond as the red flag came out following an off for the TCA class Subaru of Ben Bettenhausen.

It quickly became apparent that the recovery of Bettenhausen’s car – and the fact that the tyre barrier would need to be repaired – would take longer than was left in the session, with the clock ticking down to zero before the field was able to return to action.

It left McCann Jr on pole ahead of Filippi, with James Walker slotting into third in the Risi-run Alfa Romeo Giulietta and points leader Hurczyn in fourth – both drivers having improved just before the session stoppage.

Nate Vincent in the second of the FCP Euro Volkswagens had to settle for fifth place, with Gonzalez settling for sixth having been unable to improve on his second timed lap.

Despite the fact he was only able to get a single banker lap in before the red flag came out, Bryan Putt secured pole in the TCR Cup class as he looks to extend his impressive run of four successive class victories to strengthen his lead in the standings.

None of the TCR Cup drivers were able to set representative times before the red flag came out, with Putt’s pole time being more than five seconds down on his benchmark time in Friday practice.

Stephen Vadja was half a second back in second place, with Eddie Killeen provisionally taking third as he returns to action for the first time since the St Petersburg street race back in March. However, Killeen would lose his time when the official results were then posted, with the TWOth Autosport man having not managed to cross the line to complete his timed lap before the red flags came out.

Both Travis Hill and Christian Cole lapped outside the top ten overall – the latter with a time more than 15s down on his Friday best after he was unable to complete his second timed lap.

Race one of the weekend is scheduled to take place at 16:40 local time.