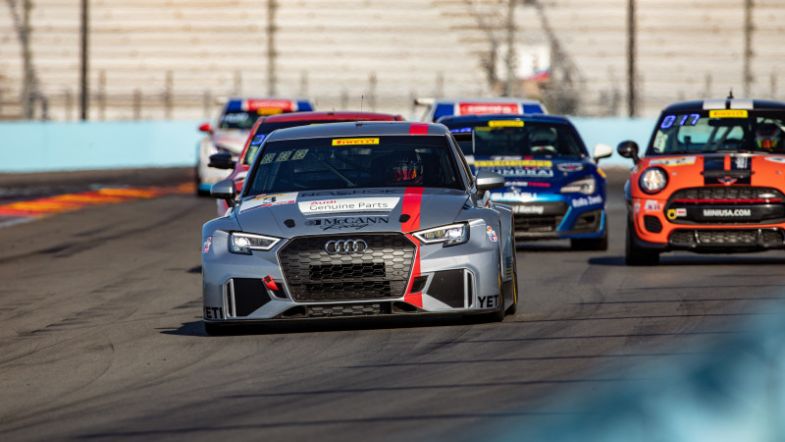 The Audi RS 3 LMS driver started from pole position but was unable to keep the lead on the opening lap, dropping behind both Volkswagen drivers Hurczyn and Vincent.

But McCann Jr fought back and made his way past Vincent at the bus stop chicane on the second lap and repeated the manoeuvre on championship leader Hurczyn not long after, claiming a lead that he kept throughout the race.

The first corner saw Honda driver Victor González spinning when going on the inside of Mason Filippi, later recovering up through the field to finish eighth.

Filippi’s race took a turn for the worse, being forced into the pits with his Copeland Motorsports-prepared Hyundai Veloster N TCR due to a fuel pressure issue.

Alfa Romeo driver James Walker closed in on the Volkswagen duo Hurczyn and Vincent as the race progressed. Walker was right on the rear bumper of Vincent’s Volkswagen Golf GTI TCR but never came close enough to launch a serious attempt, finishing fourth.

Hurczyn heads the standings on 225 points with Vincent second on 181 and Filippi third on 145.

The penultimate TC America round takes place at Road America on September 20-22nd.