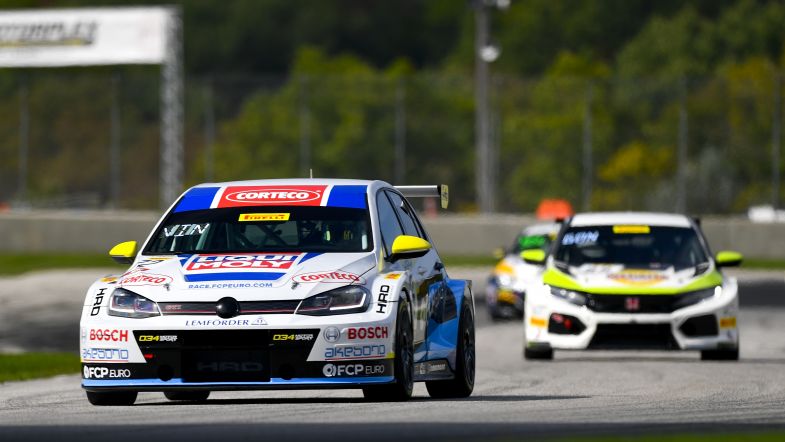 Nate Vincent mastered tricky conditions at Road America to secure victory in the opening TC America race of the weekend, beating team-mate – and championship leader – Michael Hurczyn to top honours as the FCP Euro team secured a third 1-2 finish of the season.

With rain in the air, pole sitter Michael McCann Jr made the ideal start to lead the field into turn one, with fellow front-row starter Victor Gonzalez running wide at turn three to allow Vincent through into the second.

However, McCann Jr’s lead would soon disappear as he carried too much speed into turn five and ran off into the escape road, dropping well down the order as a result.

Gonzalez then hit trouble through turn twelve as he looped his Honda Civic, whilst Bryan Putt also hit dramas on lap one in his TCR Cup Audi to leave three of the TCR cars right at the back of the field.

The lap one dramas allowed Vincent to hold a comfortable lead of nearly four seconds over Hurczyn, with James Walker slotting into third in the Alfa Romeo and Christian Cole in fourth – although Cole then had a moment on lap two that dropped him into the middle of the TCA pack.

With three laps in the bag, the two Volkswagens were driving away from the field behind, with Walker lapping nearly five seconds a lap off the pace in the tricky conditions.

Behind, both Cole and Putt in the TCR Cup Audis had worked their way back into the top eight, with Gonzalez’s Honda the quickest car on track, but still outside the top ten overall.

Pole-sitter McCann Jr meanwhile suffered another spin and found himself towards the lower end of the TCA field.

Despite worsening conditions, by lap five, the TCR cars were back inside the top seven in the overall standings, with Gonzalez having moved up to fourth as he jumped ahead of both Putt and Cole.

A spin for Walker at Canada Corner then saw him fall back into the clutches of Gonzalez and the Honda man was able to get ahead of lap six only to then make an error through turn 13 that allowed Walker to reclaim the place, with Putt, Cole and the recovering McCann Jr close behind.

Out front, Vincent was lapping comfortably quicker than points leader Hurczyn as he extended his lead to more than ten seconds by the end of the seventh lap, with Gonzalez finally able to make a stick on Walker as he moved back into the top three – albeit more than 40 seconds down on the leader.

Just as the race appeared to be settled, there were dramas for Putt as he crashed out of the TCR Cup lead and fifth overall on lap ten, nosing his Audi into the tyres at the end of sector one and into retirement.

Heading into the final ten minutes, Vincent continued to hold a comfortable lead out front, with the long nature of the Road America circuit meaning there was no need to worry about dealing with traffic.

Hurczyn would bring the gap down to under six seconds heading into the final lap and a slow tour from Vincent allowed his team-mate to close up behind as the two cars took the flag together – with Vincent snaring his second win of the campaign.

Second for Hurczyn maintained his record of finishing on the podium in every race so far this season, with Gonzalez left to wonder what might have been in third, with the Honda having been more than a match for the Volkwagens for much of the race.

Walker would ultimately end up a lonely fourth in the Alfa Romeo having been unable to keep pace with Gonzalez, with Cole and McCann Jr rounding out the six finishers.

Race two is scheduled for 11:10 local time on Sunday.