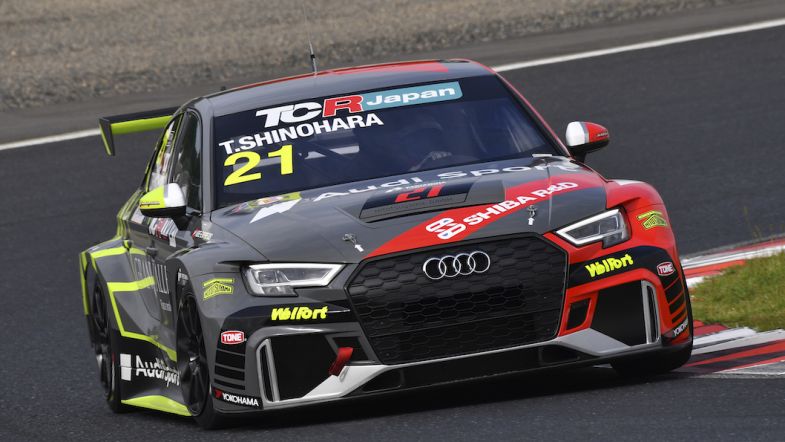 Pole sitter Takuro Shinohara headed the TCR Japan series field from lights to flag, winning the first race of the weekend at Okayama International Circuit by close to nine seconds ahead of Honda driver Yu Kanamaru.

While Hitotsuyama Racing driver Shinohara made a flawless start from pole position, Alfa Romeo driver Shuji Maejima lit his tyres from second place on the grid and dropped three positions.

The first incident of the race came in the first corner as Shogo Mitsuyama locked the wheels on his Volkswagen Golf GTI TCR and went into the side of KCMG driver Matthew Howson.

Howson spun off into the gravel and dropped to last position while Mitsuyama received a drive through penalty for the incident.

GO&FUN Squadra Corse driver Maejima meanwhile made progress after his poor start and snatched second place from Kanamaru on the second lap. But the joy was short lived as the Alfa Romeo driver received a drive through penalty for the start incident and dropped to last position, re-entering the circuit right behind Howson.

And the duo followed each other in a fight up through the field to regain positions.

Matsumoto made a move at the end of lap nine, claiming the final podium position from Hirobon.

As the race neared its end, 55 Moto Racing driver Mototino made a late move on Jun Sato into the first corner in the fight for eighth position. Mototino went into the side of Sato, resulting in a spin into the gravel and broken suspension for the Volkswagen driver.

This promoted Howson and Maejima into eighth, launching an attack on Audi driver Yoshiki for seventh position as the field started the last lap.

The trio went three wide into the Hairpin Corner, with Howson coming out on top to claim seventh position ahead of Maejima and Purple Racing driver Yoshiki.

Shinohara won the race ahead of Kanamaru and Matsumoto. Hirbon crossed the line in fourth position ahead of KCMG Honda driver Yuke Taniguchi and Resshu Shioya.

Kanamaru heads the standings on 123 points, with Matsumoto second on 111 and Mitsuyama third on 99.

The second race of the TCR Japan weekend at Okayama starts at 13:35 local time on Sunday.