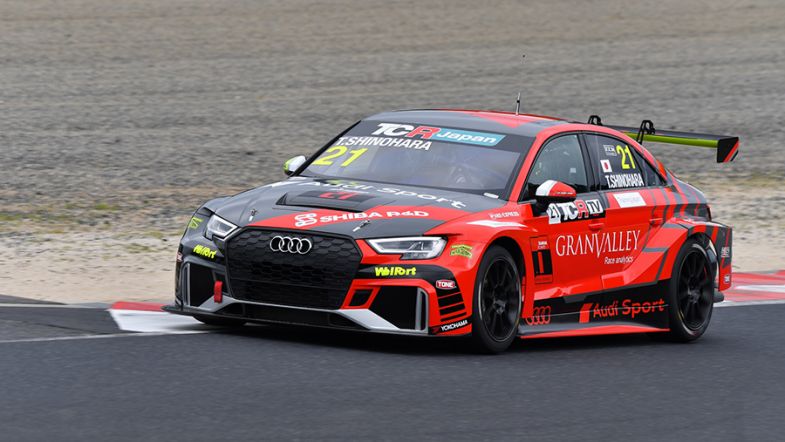 Takuro Shinohara fights back to win in style again at Okayama

Takuro Shinohara has made it two TCR Japan series victories from two races at Okayama International Circuit to claim the points lead, but had to fight for it in the second race.

The Audi RS 3 LMS driver started from pole position but bogged down at the start and dropped down to fourth position.

Instead it was Alfa Romeo Giulietta TCR driver Shuji Maejima who claimed the lead from second position on the grid ahead of Shogo Mitsuyama and Yu Kanamaru.

But Hitotsuyama Racing driver Shinohara showed unmatched pace and reclaimed third position from Kanamaru – who was disqualified from second yesterday due to failing a ride height check – on the first lap.

A lap later and Shinohara went on the outside of Volkswagen driver Mitsuyama into the hairpin to claim second place.

The Audi driver quickly caught up with Alfa Romeo driver Maejima and went past at the penultimate corner after light contact between the two.

Volkswagen driver Hirobon was given a drive through penalty for jumping the start, dropping him from seventh position to finish 13th.

Honda Civic Type-R FK8 TCR driver Kanamaru found himself under pressure from Volkswagen Golf GTI TCR driver Takeshi Matsumoto in the fight for fourth position. Matsumoto went on the inside of Kanamaru at the Hobbs Corner, resulting in contact between the two and Matsumoto going ahead to claim fourth position.

This allowed KCMG driver Matthew Howson to apply pressure on Kanamaru for fifth position. But the Team Goh Models driver managed to stay ahead and Howson had to settle for sixth position.

KCMG driver Yuke Taniguchi finished seventh behind his team-mate Howson while Yoshiki rounded off the top eight behind the wheel of his Audi RS 3 LMS.

Shinohara heads the points on 128 points, a single point ahead of Matsumoto while Kanamaru has dropped to third on 117 points.

The final TCR Japan race of 2019 is held at Suzuka on October 26-27th, sharing the race weekend with the World Touring Car Cup.