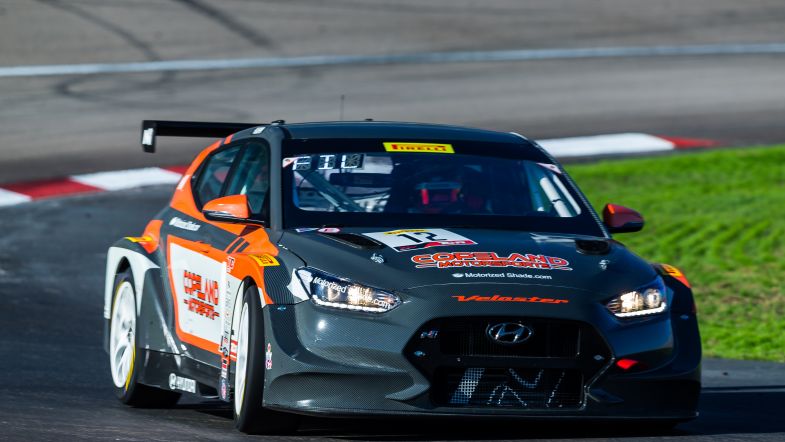 Mason Filippi secured his fifth win of the TC America season in the opening race of the season finale in Las Vegas, as an ailing Michael Hurczyn successfully wrapped up the 2019 title.

With the decision having been taken to start the action away from the oval section of the circuit, the field was shown the green flag on the short straight between turns six and seven, with Filippi leading the field away from pole.

The Copeland Motorsports driver was able to maintain his advantage from Nate Vincent, with Michael McCann Jr jumping up into third when the green flag flew ahead of Victor Gonzalez.

Gonzalez tried to fight back going into turn seven but got out of shape and suffered a spin in his Honda Civic Type R TCR, being missed by everyone aside from James Walker, who collected the Honda in his Alfa Romeo and went up on two wheels.

Both cars were forced out as a result, with the incident continuing a disastrous weekend for the Risi Competizione team after power steering issues prevented Walker from taking part in either practice or qualifying.

With the field going behind the safety car to allow debris to be removed from the circuit, Filippi led the field ahead of Vincent and McCann Jr, with champion elect Michael Hurczyn – who had managed to just avoid Gonzalez’s spinning car at the start – sitting in fourth spot.

After a ten minute clean up, the action resumed on the infield section with just under 29 minutes left on the clock, with Filippi able to maintain his position at the head of the field as Vincent was forced to defend from McCann Jr.

The top three would soon start to spread out, with the main battle in the field being over fourth spot, with Hurczyn running just ahead of the three TCR Cup Audis – headed by pole man Stephen Vajda.

At first, Hurczyn looked to simply be taking a conservative approach to the race, but it soon became apparent that the FCP Euro-run Volkswagen had an issue, with the three Audis storming by to leave him at the back of the TCR field.

Up to nine seconds a lap slower than Filippi out front, Hurczyn’s focus turned to just completing enough laps to be classified as a finisher, with a fuel pressure problem being diagnosed as the reason for his lack of pace.

There were no such issues at the head of the field for Filippi, who was comfortable out front – maintaining an advantage of just over two seconds over Vincent heading into the final 15 minutes of the race.

Even when the leading duo started to make their way through the back-markers, Vincent was unable to close in on the Hyundai ahead and Filippi duly stormed to win number five of his part campaign.

Vincent would follow him home in second spot, with McCann Jr nearly half a minute behind in third completing the podium.

The TCR Cup battle looked to be going the way of Vajda as he led from pole in his quest to secure a first class win of the campaign.

However, with less than five minutes to go, he was forced to take to the grass going into turn one whilst in traffic and was delayed enough to let Christian Cole through into the class lead.

Cole held on through the closing laps to secure the win from Vajda in fourth place overall, with points leader Bryan Putt following them home in third.

That was a result that was enough to give Putt an unassailable lead in the TCR Cup standings with on race still to go.

As for Hurczyn, his ailing car was able to make it to the finish, albeit a lap down, as he successfully secured the championship title despite failing to finish on the podium for the first time all season. Fourth in class, and seventh overall, was enough to put him out of reach of team-mate Vincent with one race to go.

The second race of the weekend is scheduled for 12:30 local time on Sunday.