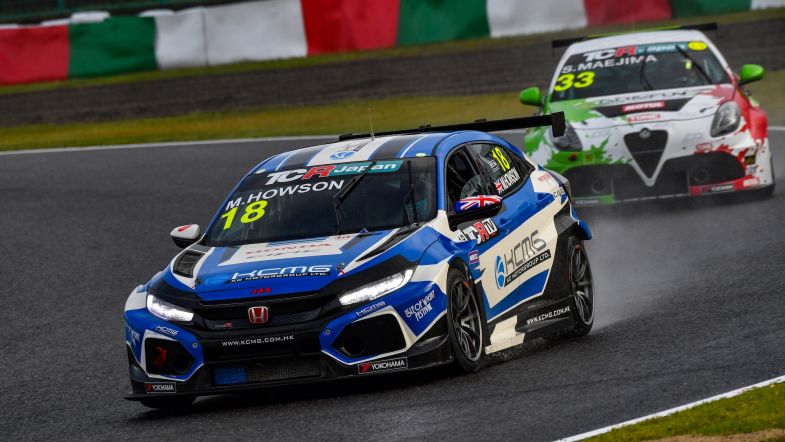 After his disappointing retirement from race one, Matsumoto had started from pole in his Volkswagen Golf GTI TCR but was swamped at the start – with Howson moving up the inside on the run to turn one but Yu Kanamaru sweeping round the outside of both to secure the race lead.

Before Kanamaru was able to try and build a lead however, the race went behind the safety car after Yuke Taniguchi tagged Shogo Mitsuyama into a spin at Spoon Curve, with Taniguchi’s KCMG-run Honda Civc Type R TCR being collected by Yoshiki’s Audi RS 3 LMS.

Race one winner Kanamaru led the field behind the safety car from Howson and Matsumoto, with Shuji Maejima, Hirobon and Resshu Shioya following behind, whilst Mitsuyama had rejoined but was down in 14th place.

By the time the two stricken cars had been removed from the circuit and marshals has cleared fluid dropped by the Audi, just under ten minutes of action remained.

Kanamaru retained the lead from Howson as the action resumed with Maejima moving up into third with a move on Matsumoto into turn one.

However, there would be less than half a lap of action before the safety car was then called out again to recover Jun Sato’s Volkswagen Golf GTI TCR from the gravel at 130R; the Adenau driver having gone off before the restart.

Sato’s car was recovered with three minutes left on the clock and Kanamaru once again held the lead through turn one as Maejima forced his way ahead of Howson into second.

Making his move for the lead through the S Curves, Maejima then tagged the rear of Kanamaru’s Honda and put the championship leader off the road and into the barriers.

Kanamaru would rejoin back in twelfth place as Maejima led the way from Howson and Matsumoto, with the GO&FUN-SquadraCorse driver now in a position to take the championship title.

Maintaining his position through the final lap, Maejima crossed the line first in his Alfa Romeo Giulietta TCR but his celebrations would be short lived as he was handed a 40 second penalty for the contact with Kanamaru that dropped him down the order and outside the points.

That meant Howson was instead handed the race win from Matsumoto and Hirobon, with Reeshu Shioya, guest driver Philippe Devesa and a recovering Mitsuyama rounding out the top six.

With Kanamaru only able to recover to ninth place by the finish, the Sunday title went to Matsumoto, who ended the campaign ahead of Kanamaru and Maejima in the standings.

Howson’s victory however ensured that KCMG secured the entrants championship.