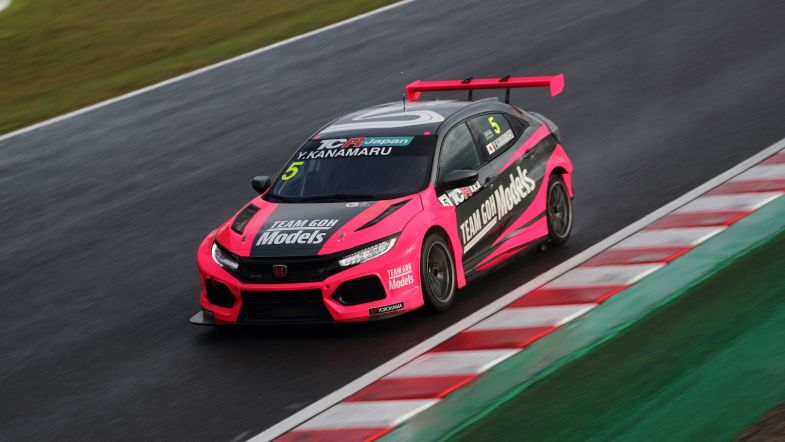 Yu Kanamaru secured his fourth victory of the TCR Japan series campaign in the opening race of the season finale at Suzuka, with Matt Howson wrapping up the Saturday series title.

Having started from pole, Kanamaru was able to defend from Howson on the run down to turn one for the first time, with the Briton then coming under pressure from the Volkswagen Golf GTI TCR of Matsumoto.

Matsumoto however would then lose out to the Alfa Romeo of Shuji Maejima, only to reclaim the place heading into the final chicane before setting off after Howson ahead.

As Howson looked to try and close on Kanamaru out front, Mitsuyama was the driver on the move further back, moving up three spots on lap two to sit fourth in this #52 Volkswagen despite struggling to shake off Maejima’s Alfa Romeo.

Masayuki Ueda then suffered a spin off into the gravel at 130R, with the stricken Audi RS 3 LMS bringing out the safety car. At the same time, the similar car of Kenji would come into the pits having toured slowly round a single lap after problems getting off the line at the start.

Once Ueda’s car was removed from the gravel, just six minutes remained on the clock and Kanamaru was able to catch Howson napping on the restart to immediately take a lead of nearly a second into the start of lap seven.

By Spoon Curve however, Howson had almost drawn onto the rear of Kanamaru’s similar Honda Civic Type R, whilst behind, Matsumoto was having to push hard to maintain third from Mitsuyama and Maejima.

Heading into the penultimate lap, Howson found himself right with Kanamaru for the lead and launched a move around the outside at turn one.

That opened the door for Matsumoto to try and squeeze ahead of the KCMG driver, with Mitsuyama also getting involved as the trio battled side-by-side through the S Curves.

Going into turn nine however, the two Volkswagens clashed and whilst both would get out of the gravel, neither Matsumoto or Mitsuyama would make it to the end of the lap and would be forced to retire.

The drama behind was enough to give Kanamaru a healthy lead that he would retain to the finish to secure victory ahead of Howson by nearly two seconds – making up for his disqualification from the Saturday race at Okayama last time out.

Mejima secured a place on the podium in third place as winner of the Gentleman Class ahead of Hirobon and Resshu Shioya, with the top six rounded out by Yuke Taniguchi.

Second place was good enough for Howson to secure the Saturday series title ahead of the absent Takuro Shinohara, with Kanamaru’s victory seeing him vault up to third ahead of both Matsumoto and Mitsuyama.

The final race of the season, the Sunday series decider, is scheduled for 16:15 local time.